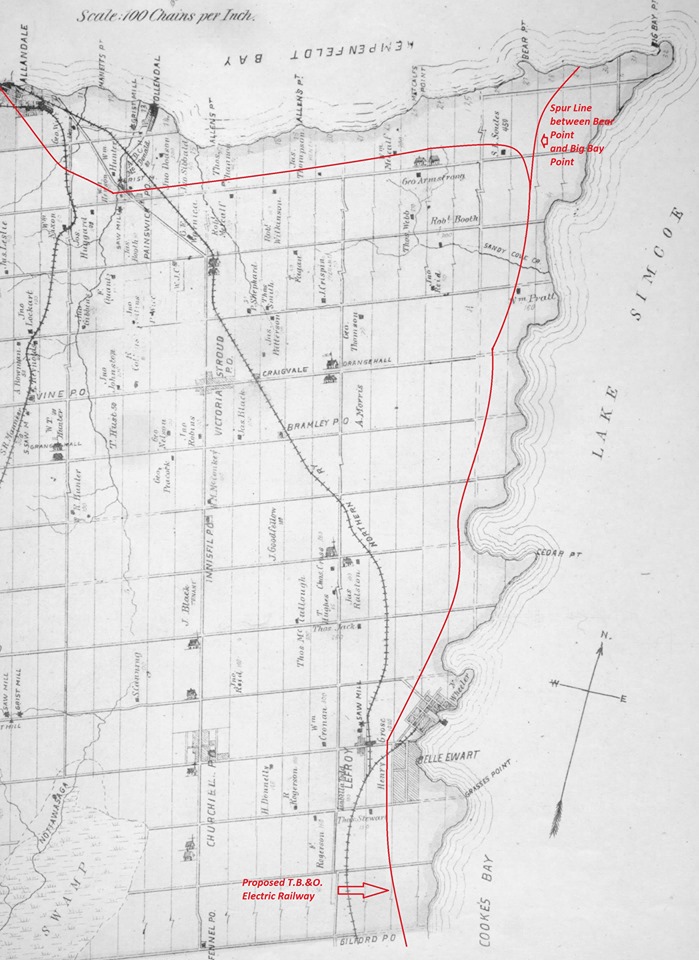 In the early 1900s much of Innisfil’s waterfront was under development creating many new cottages and homes for the Toronto and Barrie purchasers. A movement was afoot to build a railway to service the needs of these new properties along the shoreline. In 1910 a group of Toronto lawyers, accountants and capitalist applied for incorporation under the name “The Monarch Railway” to run a line from Toronto north through York, Vaughan, King, West Gwillimbury and Innisfil Townships to Barrie and eventually to Orillia, Penetanguishene and beyond.
With the popularity of electricity at this time, supported by the chairman of the Hydro Electric Power Commission, Adam Beck, who was not only responsible for bringing Niagara Falls electrical power to the Toronto area but also a proponent of electrical railway networks (called Radials). When it was decided to use electricity to power this new rail line to Innisfil in 1911, the Monarch Railway Company changed it’s name to The Toronto, Barrie and Orillia Railway or better known then as T.B.&O. Electric Railway Company. The prospect of this rail line due for completion in 1919 created more demand for property along Innisfil’s waterfront, not only for the convenience of travel but the railway had the right to enter into agreements with the municipalities to sell the excess electricity for their street lights and homes etc. Soon every real estate ad proudly mentioned just how close their property was to the new proposed railway. 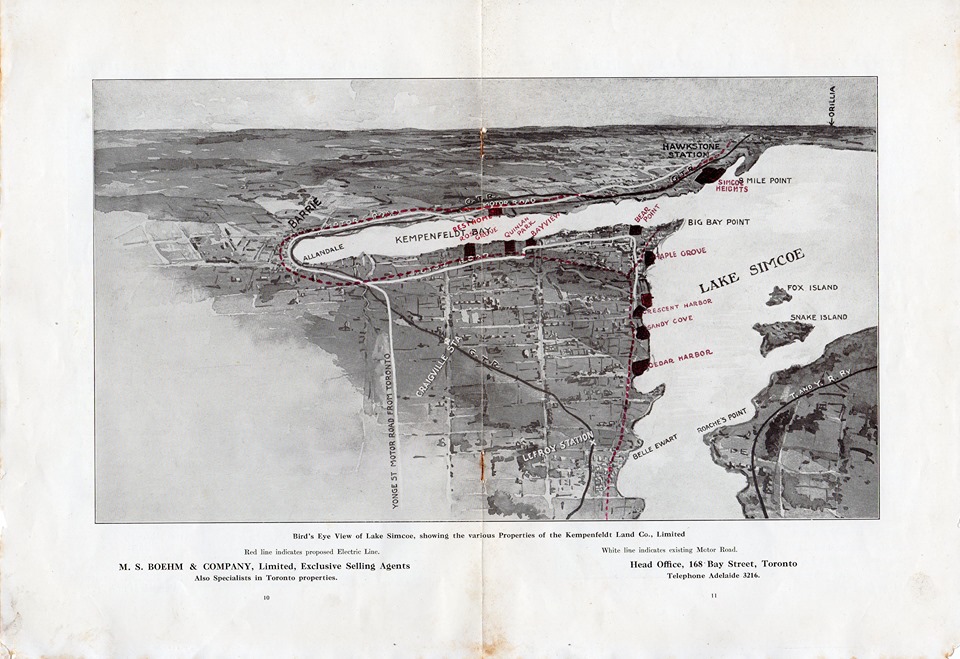 The rail line was to enter Innisfil close to the lake shore east of the existing G.T.R. tracks at Gilford, proceed north on the west side of Ewart Street through Lefroy & Belle Ewart, following close to Maple Road in Belle Air Beach and north along the east side of the 25th side road to the 12th line of Innisfil where it would curve gently towards Barrie.
Near this intersection of the 12th line near the lake, a spur line was to run north east almost into Big Bay Point terminating at Kempenfelt Bay. I have no explanation for this short line as it does not go into Big Bay Point to service the hotels but ends about a mile west. I speculate that it might be possible that it ended near Morris Stanley Boehm’s summer estate on purpose. Morris, or Major Boehn as he was better known, was a prominent and influential land developer in Ontario including many large tracks of land in the Innisfil and Barrie area affected by this railway. This rail line seemed to connect to or run through many of the properties he had for sale and although he was not one of the original founders in the T.B.&O. I believe he must have had some influence to have a spur line end in the area of near his cottage. Beyond that spur line, the tracks would have proceeded west towards Barrie through what was the Soules’ farm (Now Friday Harbour), across the 25th side road, along the north side of the 13th line, (north side of the Big Bay Point School), and into Painswick where it crossed Yonge Street close to the school and then carried north to Allandale on the west side of Highway eleven.

The Demise
The T.B.&O. had been allowed to raise funds through the sale of Bonds, Debentures and Securities to build the rail line. Probably due to the war years, they never quite earned the amount required to initiate construction. The company petitioned the government on many occasions for a reduction on the amount of funds required to start as well as extensions to the time. The funding was not the rail lines only opponent. Sir Adam Beck had his own ideas on how electricity and electric radials should be operated and thought that independent corporation was not the way to go and would conflict greatly with his scheme of a government owned hydro distribution systems. Even with many protracted government debates and lobbying by the rail line, it was never to be, when Sir Adam Beck’s Legislative Committee rejected any changes or extensions, killing any chance for the railway.

After the March 1915 meeting, the T.B. & O. Electric Railway faded away never to be built and leaving it up to our imagination on what impact that electric rail line may have had on our township.

About the Author: Bill Warnica