One of the original ‘dogs with jobs’!

You may recall from previous blogs, mention of the Tordiff family – long time contributors to the Barrie Archive, since before it even launched. Whenever the Tordiffs drop off family memorabilia for the Archive, Bob always tells the tale (tail?) of his brother’s dog Ted. So without further delay, here’s the story of Ted the Wonder dog.

“You all have heroes right?” Bob begins. “Well, I do as well! Let me introduce you to my hero, our family Samoyed, 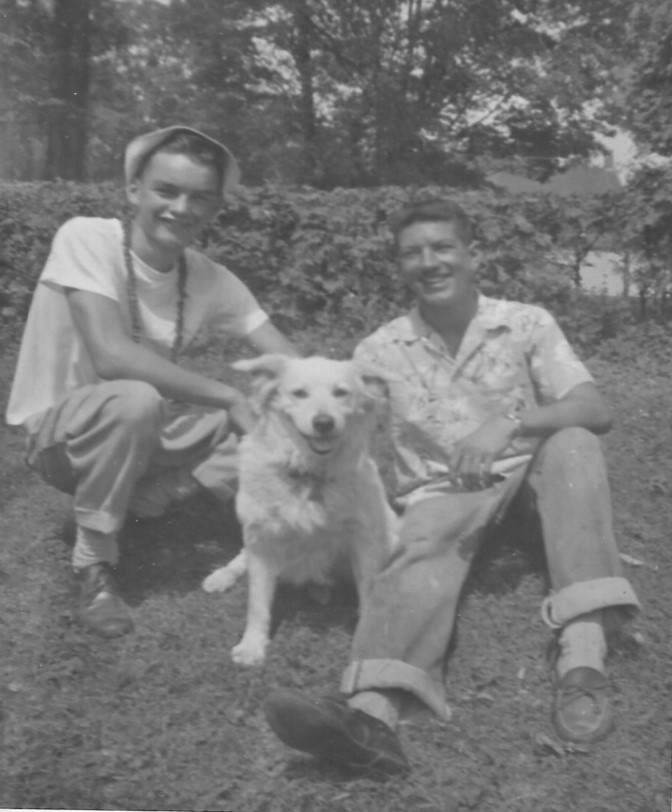 Ted, who later earned the title, “The Wonder Dog”.”

“There was good reason for his reputation, as I will try to convey to you. My older brother, Bill, must get full credit for training this remarkable family member. In our youth, both Bill and I had long term Globe and Mail early morning paper routes. While my route was an easily managed 36 customers, Bill had a formidable 110. Ted, was our partner in business, and a thorough working dog. I was only allowed the use of Ted when Bill was on vacation or ill.”

Bill Tordiff was quoted in a December 26, 1951 interview with the Globe and Mail: “I started to train Ted by teaching him to hold the paper in his mouth”, Bill said. “When he mastered that, I had to get him to take it to the door. Then came the hardest part, making him drop it and come back. It took about a month before he’d do it properly, but now he knows all the houses and I don’t even have to tell him which doors to go to unless I have a new customer.”

Warming to his subject, Bob continues enthusiastically, “Ted knew both our paper routes by heart. As the working heart of our business enterprises, he would take a rolled up paper in his mouth and drop it off at your doorstep six days a week. He became a local celebrity in our hometown, Barrie. No matter what the weather conditions, or distance for delivery, Ted was reliable. People would get up in the wee hours of the morning to accept their morning news. Ted was reliable and you would receive fresh news right from the ‘dog’s mouth!’ Ted, on very rare occasions, would rebel, if his work load was excessive, or the weather extreme. On those days, he would drop the paper in a swimming pool en route or just lose it. Customers understood the situation and would phone, in a kindly manner, for a new paper. They never blamed Ted, they loved that dog! Each morning, at the end of the route, Bill would load Ted into the bicycle carrier, and Ted would get his reward, a fast ride, ears flapping, down the Dundonald Street hill to our house at the bottom, on Kempenfelt Drive.” 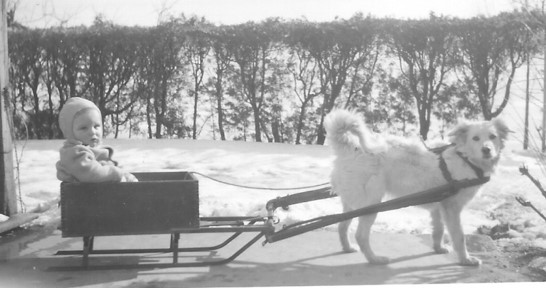 Bob adds “Winter was a major problem for us. You could not ride a bike through deep snow, particularly as the roads were often not completely plowed that early in the morning. Also, it would be pitch black then. Nevertheless, Ted came through yet again! My Dad constructed a very efficient sled and harness so Ted could easily pull the papers along the paper route. However, he could not actually deliver the papers to the door as he did in the warmer weather.” 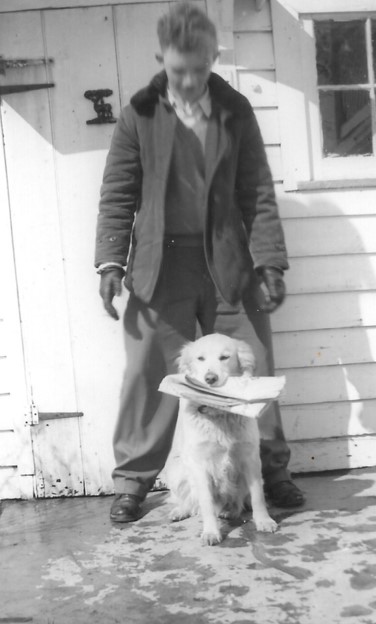 Ted had a weakness however. “All went well, unless Ted saw one of his mortal enemies, black squirrels! On these occasions he would launch himself at warp speed in pursuit of his enemy and the papers would be at risk! These events did not end well for anyone, except the squirrel who always made a safe getaway. This was likely due to the fact that one particularly aggressive squirrel once turned around while escaping up a tree and grabbed Ted by the nose with his powerful nut-cracking teeth! Ted’s chasing speed became considerably slower after this incident!” 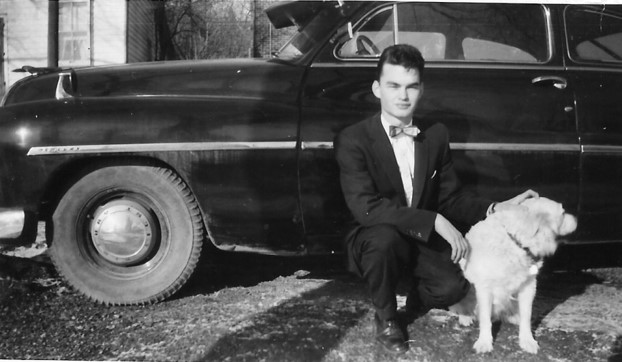 “Ted loved house parties with rock and roll dancing, because he could nip at our ankles without fear of punishment, since he was a celebrity of some note!”, Bob adds.

“Ted was extremely proud – some would say arrogant! He disliked being referred to as a mere dog. He refused to drink from a ‘dog 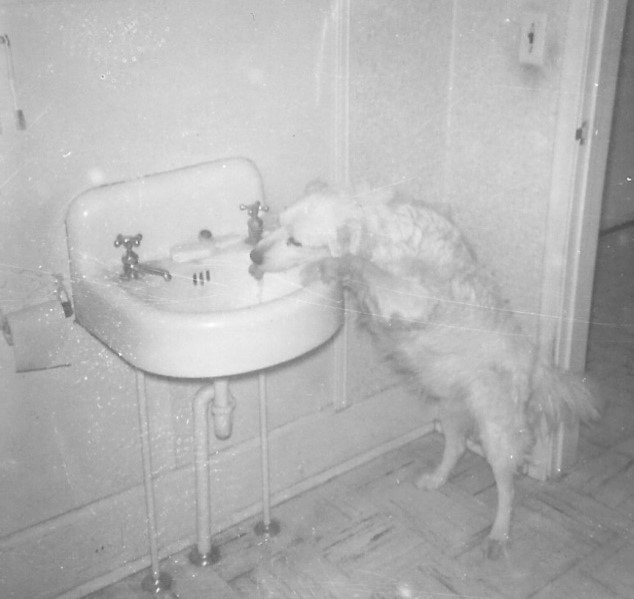 dish’ . This was below his perceived station in life. He would often grab you by the pant leg to indicate that he was in need of a drink. Your expected reaction was to go to the bathroom sink, turn on the tap and check the water temperature. After he drank his fill, you were expected to turn off the tap and clean up any spillage. He rarely ate dog food, I believe the actual term ‘dog food’ repelled him. He ate only the very best prepared ‘people food’. Ted, had high standards! He thrived on this fare and actually lived to almost 25 people years! This was one of the reasons that he was known as Ted, the Wonder Dog, I suppose!” 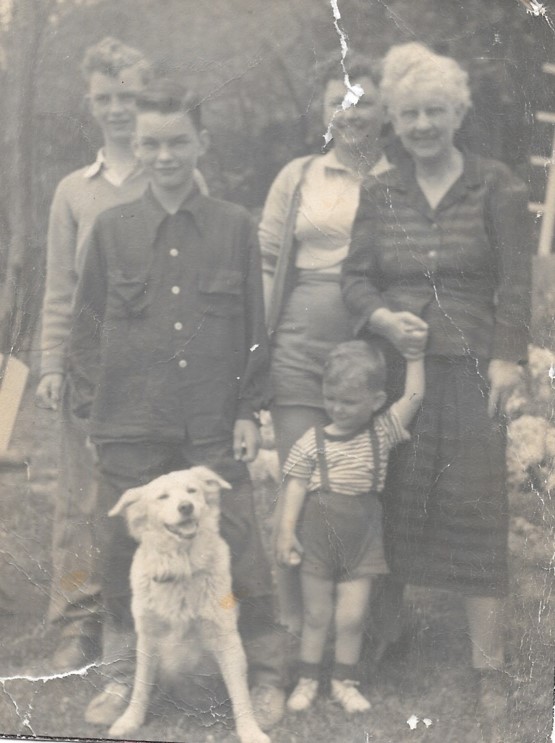 Bob confides that, “Despite Ted’s aristocratic attitude and elitist tastes, he was still just a dog. (Of course, we never said that in front of him, he would be soooo offended!) This was proven by the fact that, like ordinary dogs, he could never resist the powerful allure of a car tire. His territory had to be clearly marked in the usual style of the dog kingdom.”

Bob concludes that “Ol’ Ted is dead and gone these many years but he will never be forgotten. I am confident that he is somewhere up in doggy Heaven, delivering the Heavenly news or peeing on the chariot wheels of some unsuspecting angel! He was my hero!” 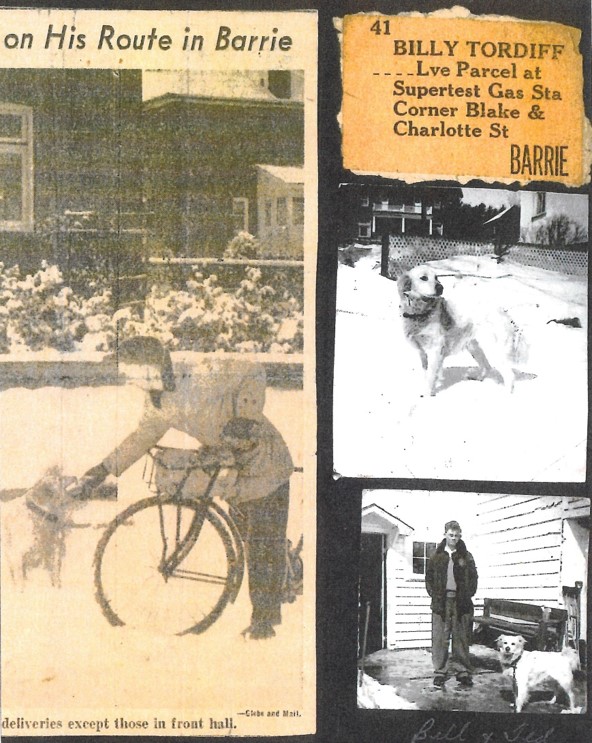 pretty sure that there are still some folks out there that remember their four-legged paper ‘boy’.

Thank you to Bob and Gerry for their memories and photos. Be sure to browse the Tordiff  collection when you get a chance!