A soldier’s sacrifice tells us all we need to know

“Here’s another one of Borden. Some more on Borden here.”

And so on, and so on it goes. Sitting with Ann Campbell, she lifts one voluminous book after another onto the dining table before us. Ann, who traces her ancestry to the McCutcheon family of Florence Street, Barrie, has invited me to her handsome Newmarket home. We’re surrounded by boxes of family photo albums and precious keepsakes.

And while Ann and her family have amassed an impressive historical trove, a great portion of the documentation is devoted to one man, now dead for three-quarters of a century: Ernest Borden McCutcheon, Ann’s uncle.

In Barrie, Borden grew up much as you’d expect. He worked at the bowling alley, and then as a delivery driver, before taking up work at Robson’s Bakery. He was schooled at Prince of Wales and Barrie Central Collegiate, and spent his childhood Sundays in classes at Central United Church. Eventually, he became a member of Collier Street United Church.

But at war, he was Flying Officer McCutcheon, a sturdy 24-year-old airman. He served proudly as a wireless-air gunner in the Royal Canadian Air Force, manning a turret in the underbelly of a bomber command aircraft, while also controlling radio communications. He honed his craft as an air gunner after enlisting in September 1941, graduating at the top of his class in Paulson, MB more than a year later in October 1942. His parents, Nelson and Eva, received a telegram indicating his safe arrival overseas on January 29, 1943.

Just seven months later, another telegram would arrive on July 22: “Regret to advise you that your son, Pilot Officer Ernest Borden McCutcheon, is reported missing after air operations.”

And while Borden sacrificed all that was to come for him back home in Barrie, he has never been missing from anyone’s thoughts in the 75 years that have followed. 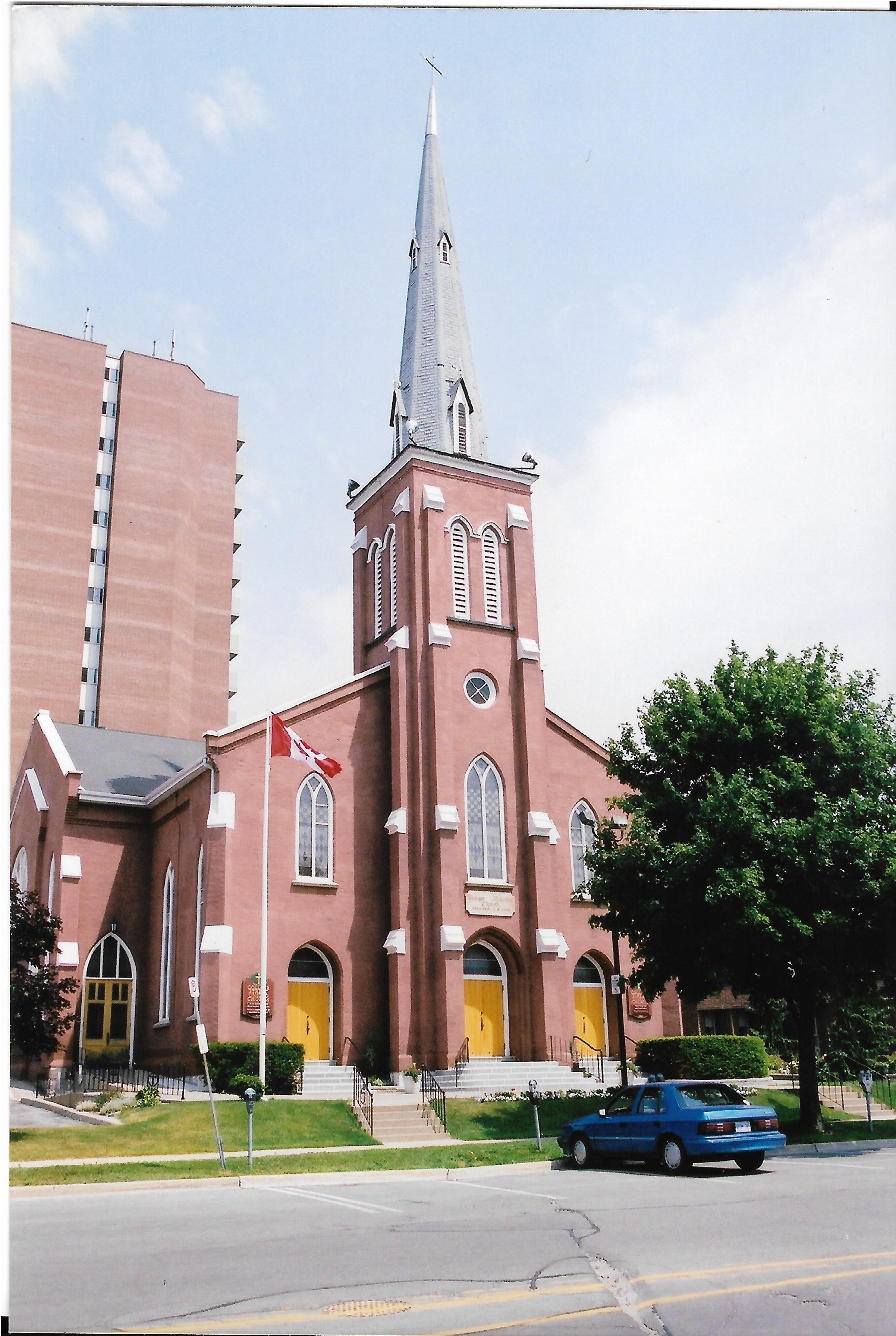 Ann’s albums are proof. She shows me a picture of a rose she laid at the foot of Barrie’s cenotaph in Fred Grant Square just a decade ago, in memory of her uncle. Here are more from 2003, when Ann’s son and daughter-in-law, Jason and Miriam, visited from England and paid tribute to Borden at the Collier Street United Church. There, chimes are dedicated to Borden and 11 other men who lost their lives during the Second World War.

Memories of Borden are preserved right there alongside memories of Ann’s mother – Borden’s sister – Mossie, who would go on to live a fascinating life as a nurse, wife and mother of three. Mossie spent a lifetime carving out her legacy, which itself, is a beautiful one. The mother of three, gram, and great-gram to many more excelled as a nurse, earning a degree from the University of Toronto and travelling to Inuvik to care for Inuit children between 1964 and 1972. She spent 85 years developing a legacy to be admired.

Many of us are granted a similar opportunity. We spend a lifetime crafting a portrait of ourselves to hang in a room reserved for us in others’ memories. Our finest moments are documented in photo albums and scrapbooks. Our more regretful moments, we hope, are cast aside and forgotten. When we pass, someone tells our decades-long story and an audience of mourners are left to deduce what they will about our character.

Borden was never granted that chance. But all that needs to be known about his character lies right there in that selfless deed. His sacrifice tells us what he stood for. It makes clear his bravery, nobility and honour. His fight serves as a demonstration of the love he had for those he left behind, rather than hatred for those who sought to bring his bomber down out of the sky.

Borden, along with every Canadian killed at war, never lived the lives they deserved. But their one, greatest sacrifice tells us more than one million photo albums ever could.