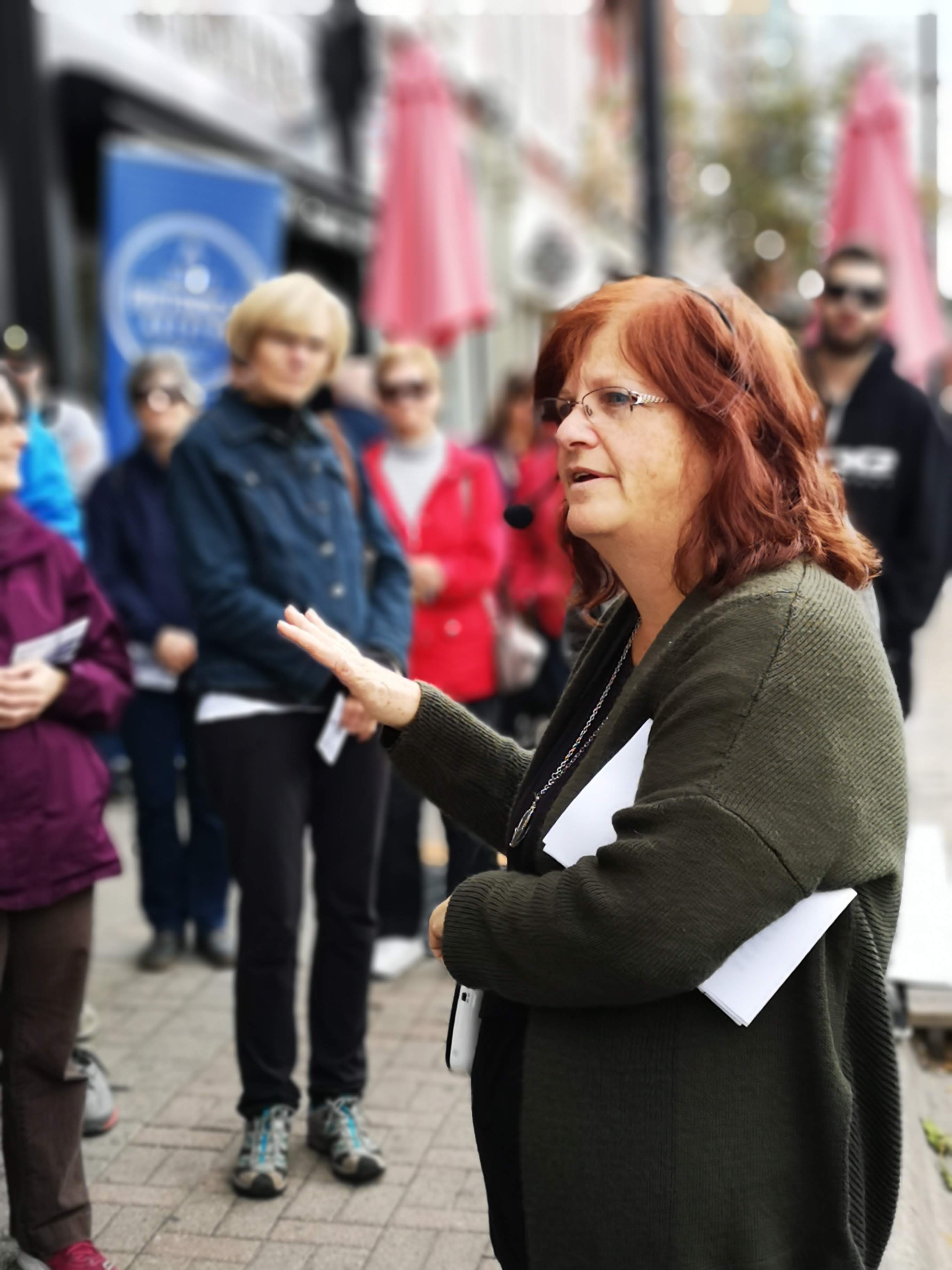 Exposed to the stiff fall breeze, a large group of warmly dressed people looked south from Homestead Bakery and Artisan Cafe and took in a view of Kempenfelt Bay that didn’t exist 60 years earlier.

The group huddled around our own Mary Harris, ready to embark on the organization’s second annual Places in Time walking tour on Saturday.

Harris directed everyone’s attention to a large print of a 1915 postcard photo in the bakery’s window. The black and white print appeared to have been taken from Homestead’s front step—one century earlier.

And while the print included a majestic post office building with a distinctive clock tower, and further in the background a handsome Grand Trunk Railway station, the view this weekend featured Meridian Place, a modern urban centre completed earlier this spring.

Harris called the place the birthplace of Barrie, highlighting its historical significance as the eastern terminal of the Nine-Mile Portage, a route used by indigenous peoples to reach Georgian Bay and later by the British military to transport men and supplies to Penetanguishene and other points west.

As the clock struck noon, the crowd of roughly 60 began shifting westward toward Mulcaster Street.

“This block, appropriately named the Boys Block, was owned by Henry Boys,” said Harris, looking up at a row of businesses and apartments on the south side of Dunlop Street East. It burned down in 1873, before being rebuilt in 1876.”

Harris leaned against a sturdy post painted maroon and pointed up at the intricate masonry between apartment windows above J’adore Fine Cheese and Chocolate.

“The most interesting shops are these last ones,” she said, referring to the cheese shop and neighbouring cafe Bohemia. “They were bricked by William Macey, who added those gargoyle-like stone faces, while William Sewerey’s local foundry made these iron posts.” 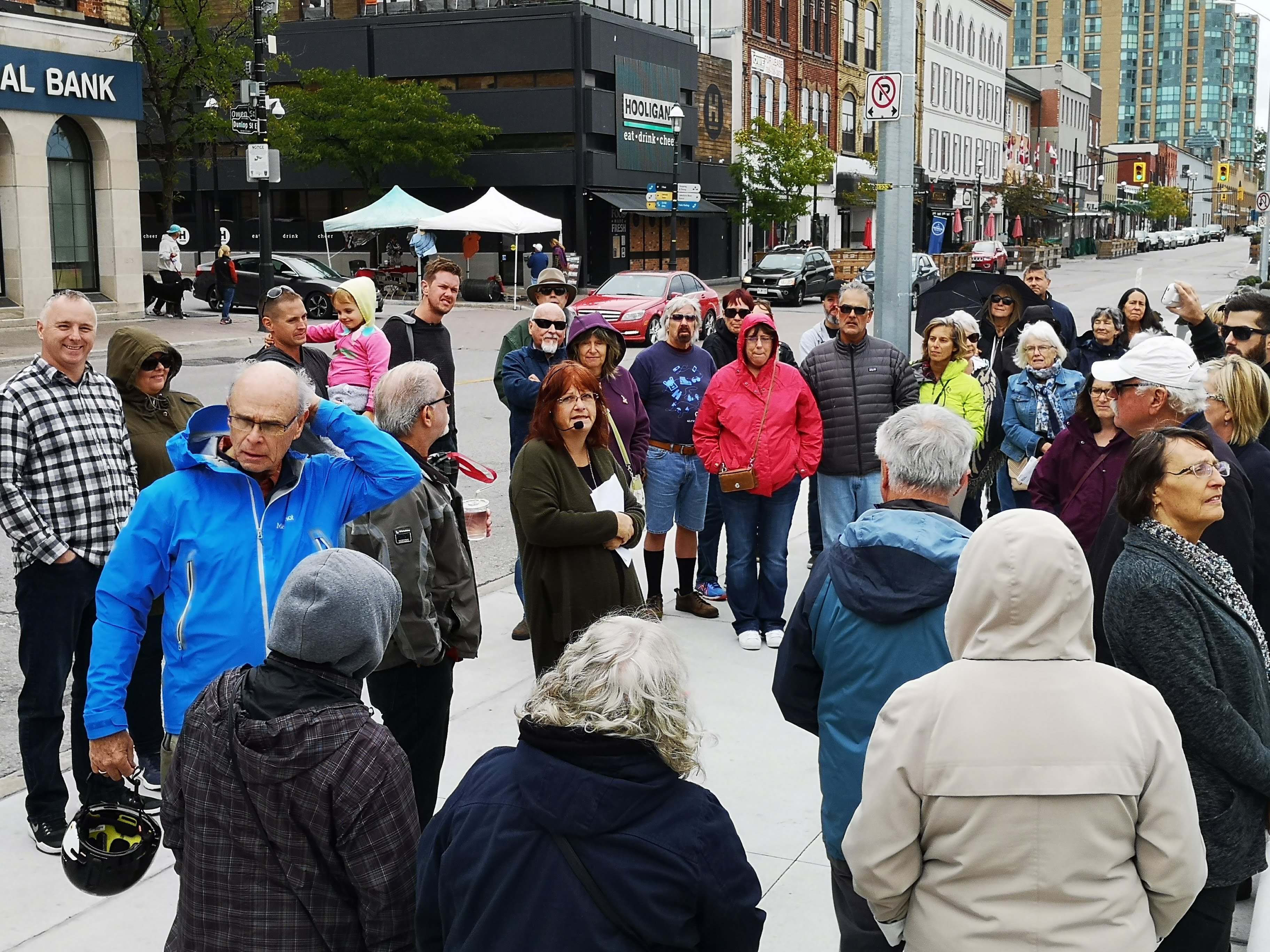 A group gathers near Meridian Place during the Places in Time tour.

The walking tour breathed life into these kind of small details, still tucked away here and there, that harken back to a time where the city’s residents and proprietors took real pride in their downtown core. Harris, an employee at Salvation Army’s Bayside Mission and archive volunteer, conducted her research using resources from the Barrie Public Library and city archives.

Self-described as a reserved person, Harris uses the archive, and her passion for uncovering her city’s history, as a way to break her normal routine.

“I’m trying to do more things outside of my normal comfort zone,” she said at the tour, which she conducted between speaking engagements at the Bradford-West Gwillimbury Historical Association and a nearby retirement home. “I would have never done something like this before.”

Harris asked her audience to think outside the box, too, as she painted a picture of times gone by. The walk took the group west to the Glebe Block, the cluster of buildings between Meridian Place and Bayfield Street. There, she highlighted the perjury of Mrs. Guthrie, who attempted to burn down the Wilson building, long-time home to the Bank of Montreal, simultaneously with her own home on Thompson Street for a grand insurance claim.

To the northeast, the group waded to Clapperton Street where they learned of a flood in 1890 that tore a canyon through the road that was 20 feet high by 20 feet wide. From there, they headed eastbound, eventually returning to Homestead, where the bakery offered cookies and coffee to benefit the archive.

“The archive is driven by the passion of our volunteer group,” said Billy Courtice, BHA chair. “But it is fuelled by the tremendous support of our community and its institutions,” he added, noting that six Barrie businesses had sponsored the walking tour and posted historic prints in their storefronts to complement the event.

Volunteers at the BHA are still seeking material and monetary donations—email [email protected] to learn how you can contribute.