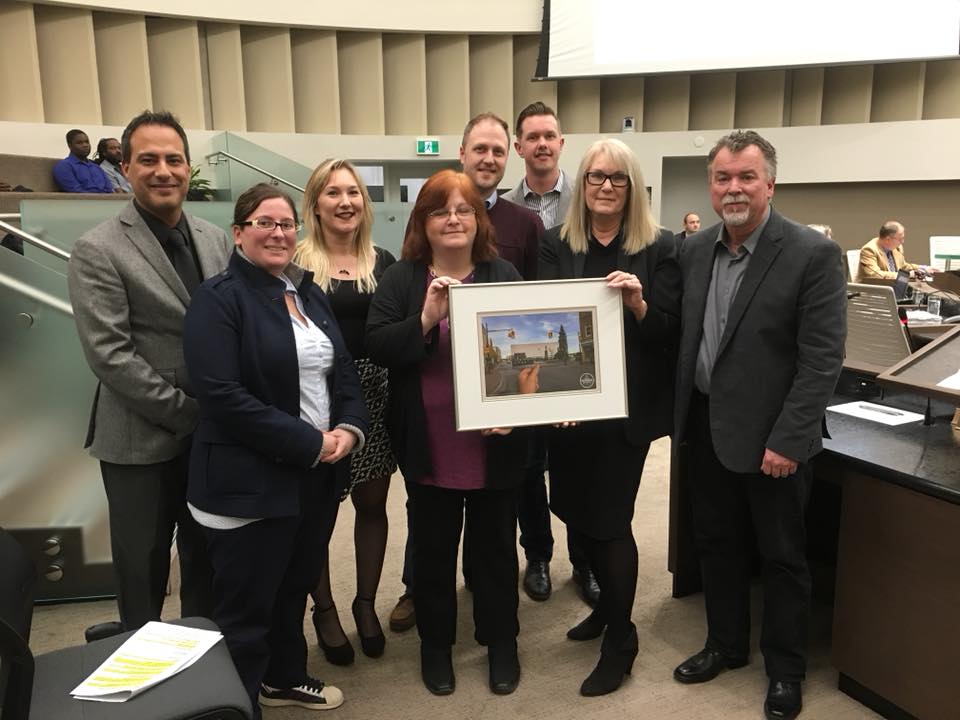 Members of the BHA celebrate their group award from Heritage Barrie.

All the Barrie Historical Archive wants for Christmas is…you!

We would be amazed if you shared your historical photos/documents with us. Elated if you offered us your time as a volunteer, or as a member of our board of directors. Honoured if you supported our cause with a monetary gift or recurring donation.

Email us today to find out how you can make an impact on Barrie’s only free, credible online archive celebrating and centralizing Barrie’s historical content.

I’d like to say 2017 was a historically significant year to the Barrie Historical Archive, but I’d be remiss.

After all, every year is a historically significant year to the Barrie Historical Archive!

This fall, the city commemorated the archive’s first full year in operation on Barrie Historical Week and we conducted a nostalgic walking tour of downtown, ‘Places in Time’, while we eagerly grew our database to more than 10,000 pieces strong. Earlier in December, our members were thrilled to receive a Barrie Heritage Award from the Heritage Barrie Committee in the group category.

We rang in Canada’s 150th birthday with a retrospective look into its centennial at our City by the Bay ’67 film screening. The screening featured the outstanding work and oldest archival footage of Barrie’s long-standing broadcast station, CKVR.

We also honoured victims of the tornado that tore through the city in 1985 – and the brave emergency workers and media who responded in the moments and months that followed – at a second film screening titled Tornado Tales. There, we welcomed former CKVR reporter, long-time Barrie resident and beloved Breakfast Television host Kevin Frankish to share his memories from the response to the devastating natural event.

2017 also allowed us the opportunity to bid farewell to Central United Church while stuffing our bellies and honouring the property’s connection to the Royal Victoria Regional Health Centre. At Birth of the Butter Tart, we hosted a butter tart bake-off and traditional luncheon of historic proportions. We also bid farewell to archive visionary and founder, Dr. Travis Doucette, as he embarked on a new career as an associate pastor at Harvest Bible Chapel in Naples, Fla.

Whew! What a 2017. Here’s to the new year, let’s make it historically awesome, Barrie!