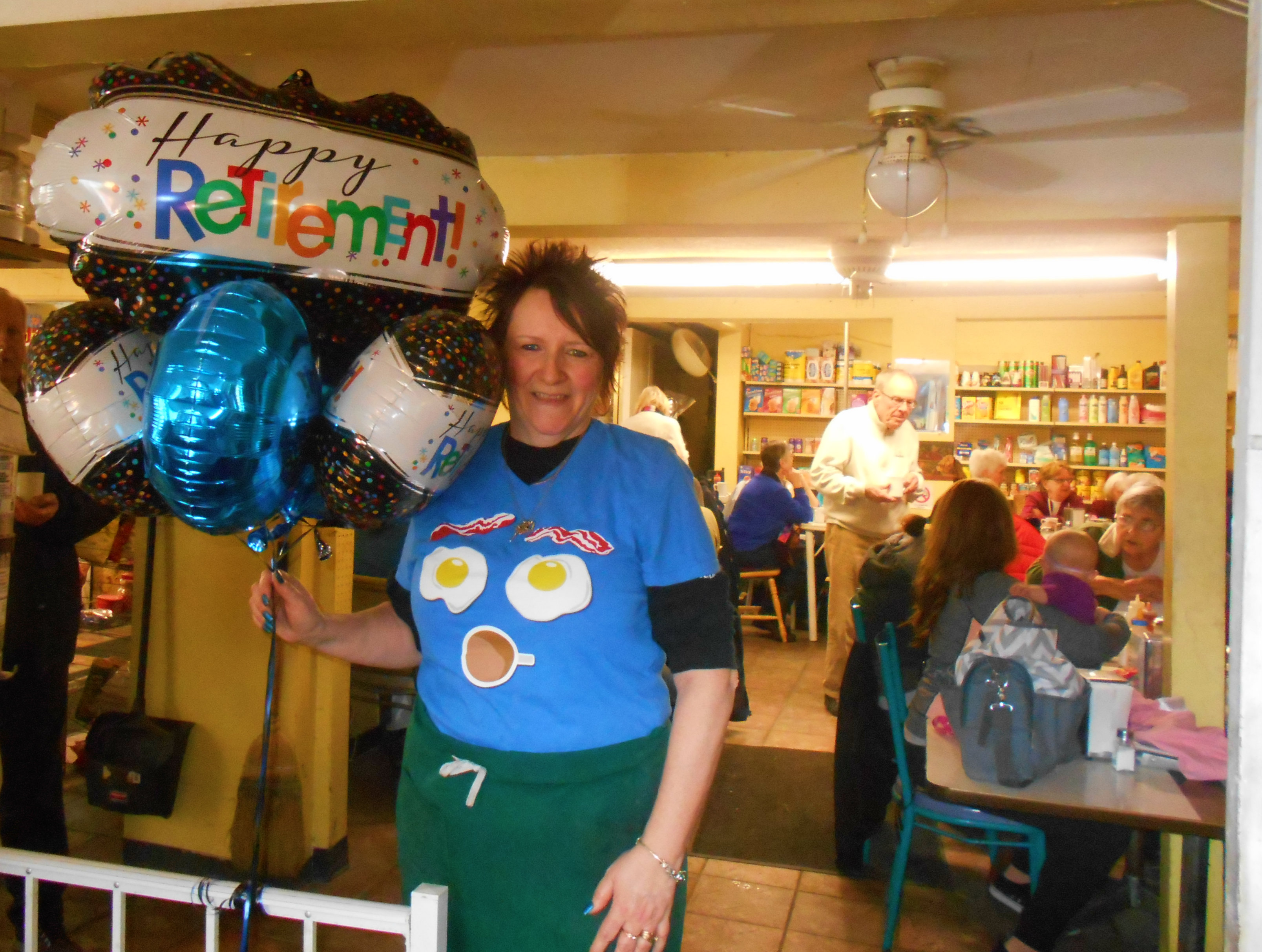 “Hey Lang, you should go out of business more often!” shouted one jokester, but I doubt that that Lang even heard him over the drone of the kitchen exhaust fan, that was running full tilt, accompanied by the laughter and conversation in the packed small diner.

Yes, they were here to patronize Lang’s business, but the real draw was long-time cook/server and familiar face, Anna, who was serving her last customers that Saturday, after an amazing 39 year run as egg-flipper extraordinaire at the East End Variety & Snack Bar.

I arrived about 10 a.m. with a large bouquet of ‘Happy Retirement’ balloons and found Anna serving the biggest crowd seen at East Side in years. She took orders, cooked the food, accepted many hugs and gifts, threw around a few of her customary wise-cracks and stopped now and then to dab at her own tears.

With final closing some time this week, the place was looking a little bare, devoid of much of its inventory, and lacking quite a bit of the collection of multi-decade memorabilia I found a few years ago when I first sat down to write about this beloved little spot. Let me take you back to 2013. 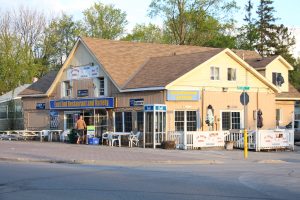 today’s article, because I really feel like I took a trip back in time and arrived in Mayberry or at least a small piece of once small town Barrie that has somehow been frozen in time. I’m not sure what decade I landed in. It could be the 1970s, as one of the numerous wall calendars does date to 1975. What I do know is this little spot is a tiny time warp, a living time capsule and a magnet for those who crave a little bit of “the good old days”, not a modern retro place, but real retro!

I’m talking about the East End Variety & Snack Bar at 193 Blake St. My friend Anna works there. She is about my age … let’s just say our children are school mates and will be graduating high school next year! Anna, a former resident of the east end neighbourhood, has been making breakfast most Saturday mornings for her regulars since she was in high school herself. She admits to being there 35 years now. I have been meaning to check out her cooking for a while now and decided today is the day. 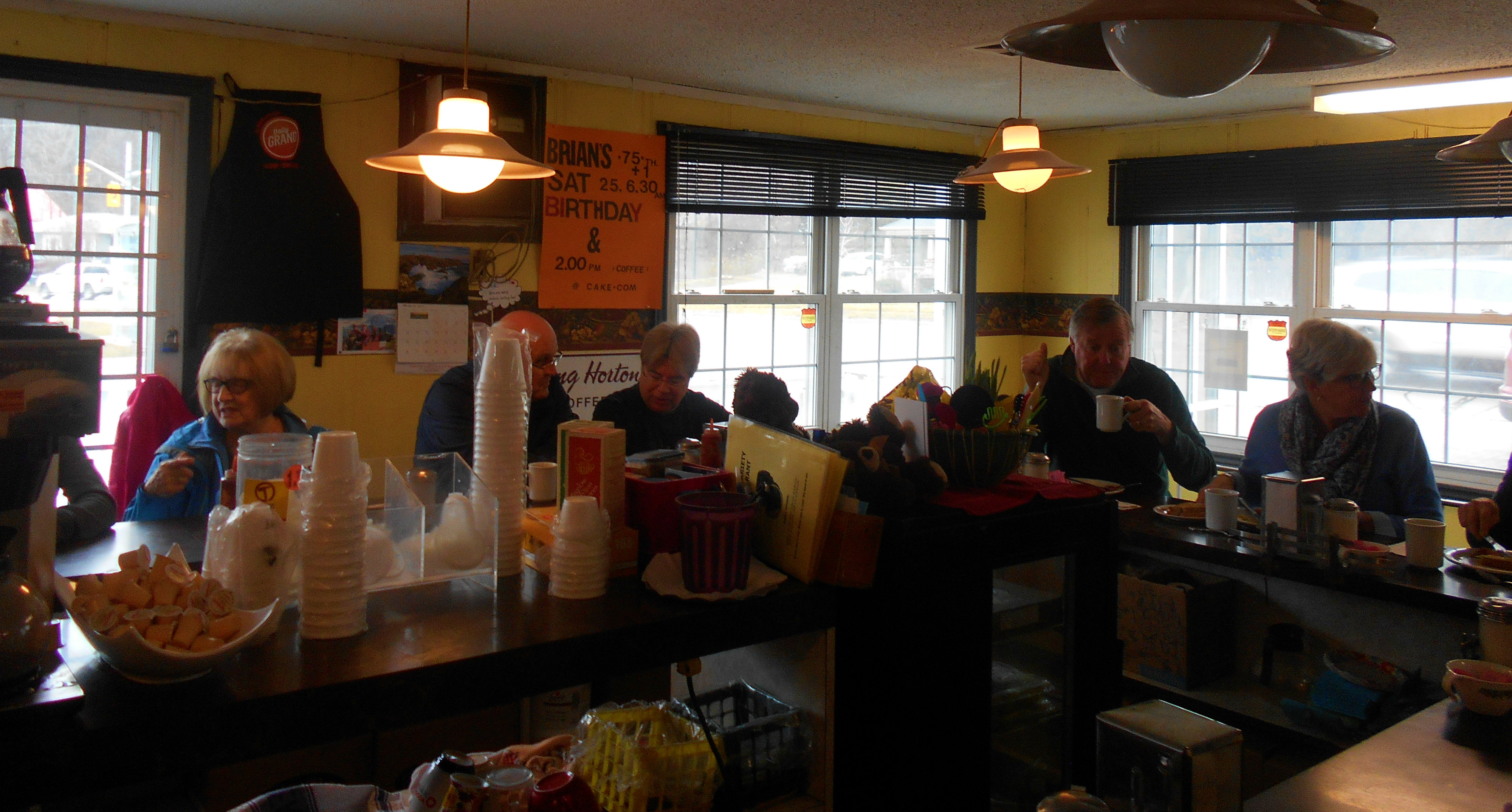 “Mary, you showed up!” Anna saw me through the window before I was even inside the building. Again, I was reminded of a long ago TV program, “Alice” where you knew your waitress’ name and she knew yours. Stepping inside was definitely a jolt. I’m not sure what I was expecting but it wasn’t this. I haven’t seen a diner like this since travels with my family through the U.S. forty years ago. The screen door squeaks just a little, the floor is uneven and miles of green devil’s ivy snake their way in every direction across the ceiling. You can sit on a stool by the U shaped counter or pull up a mismatched chair to a table next to an aquarium which is home to some gargantuan koi type fish. And when you are seated, have a look around and take in the never ending array of visuals from clocks, posters and knick knacks to the general store offerings of milk, snack foods, lottery tickets and newspapers.

Anna brought around bright blue laminated menus, offered Ron and I coffee and pointed our son to the reach in fridge where he could get 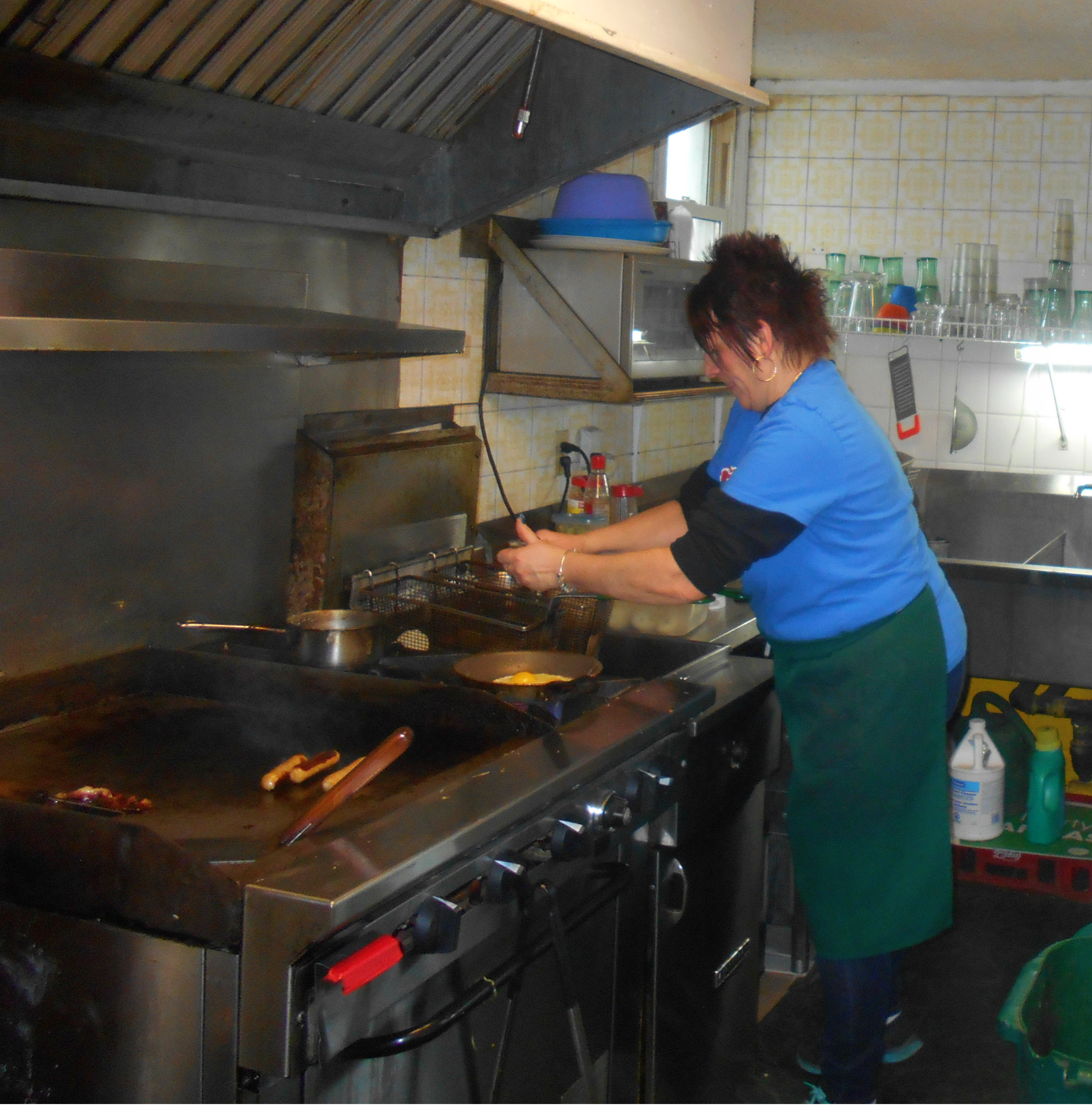 himself a cold drink. Anna is perfect for the job she has. She’s boisterous, humorous, extremely sociable and quick with a joke or a refill of your coffee. Our son ordered his stand by meal, bacon and eggs with the eggs over hard. Anna offered to step on them to make sure they were done! She told us with pride that the home fries are actually home fries that she makes herself and not some frozen bag stuff. She is both cook and server, with her employer Mr. Lang Nguyen assisting and working the cash register. Neither person takes them self too seriously as is evident by the large sign proclaiming the virtues of Lang Horton’s great coffee!

I opted for the vegetarian omelette. It was really good! It contained lots of mushrooms, something I like and Anna later told me she had never had the opportunity to make that particular menu item before, which is shocking considering all her years there. She more or less winged it and added extra mushrooms because she’s a mushroom fan herself.

East Side Variety & Snack Bar is the real deal. You won’t find any pictures of Elvis or Marilyn there, unless of course they’ve been hanging there since Elvis and Marilyn were still living! Your grandparents and neighbours have been coming here for decades and that speaks for itself. Somehow a little unpolished jewel like East Side Variety & Snack Bar can keep customers coming back year after year simply with great food and friendly service, while so many other eateries have come and gone in the meantime. The true test of success is the test of time and Anna, Lang and East End Variety & Snack Bar certainly have passed that with top marks. Drop in some time and see Barrie at it’s friendliest, small town best. It’s nice to know that you still can.