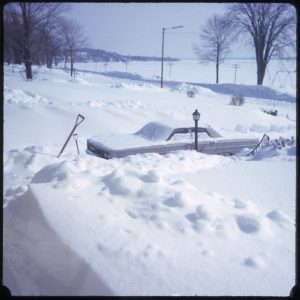 And then I remembered these very days, only they occurred over a weekend in 1975.

Barrie’s population was 31,399.  Eastview Arena was a new building on Grove St, surrounded by farmland. The south end ended at the top of Essa Rd, near what was CKVR Television. Ponderosa Steakhouse was a mainstay eatery on the growing Bayfield St strip of businesses. The drive in theatre was at the corner of Bayview and Little avenues.

Barrie boasted two arenas then… Eastview and Dunlop. And the town (we were officially called a city, though) was hosting a major, minor-hockey tournament. Kids and sticks and pucks and parents and every single hotel and motel room was filled for miles around. Families were being billeted. There was no more room at the inn, so to speak.

I was editor/writer/photographer for the Barrie Banner in those days. News, sports were daily fodder.

And so when a blizzard rocked this area, the tulips took a hit. One foot  (imperial measure in those days), two feet, and it just kept snowing as more dumped itself throughout the community. Highway 400 was closed. Tractor trailers and their drivers were pulled off the highway and many truckers housed all night at the nearby Ponderosa, its long tables serving as beds and its parking lot serving as trailer resting places.

The entire community was locked in solid. And nobody was moving.

My friend Janis Hamilton was extremely pregnant at the time, and we talked by phone about how she would get to the hospital if baby arrived (no advance gender knowledge in those days either).

And here is what’s best about Barrie. The snowmobile club was out in full force, marshalling emergency lists of who needed to get where. They divided up the community into districts; they checked in on old people (no internet or cell phones in those days). They delivered groceries because nobody could get to the stores. They took doctors to work and emergency vehicles were given only priority. 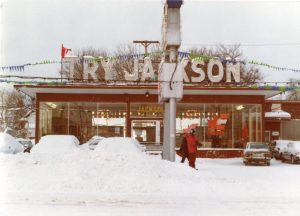 And so, a reporter/photographer with a minor hockey tournament underway (this is Barrie, after all, and a HOCKEY tournament was on) had one way to get about. I got out my cross country skis and headed the distance over to Eastview Arena. Long, long ski. And then down to Dunlop Arena. Long, long ski. I wished I had a snowmobile. I wished I could be considered an emergency. Capturing photos of snow cliffs slammed up against people’s front doors, of streets hip high in snow, of snowplows churning their way along major streets as the snow just kept coming.

There are likely surviving stories and photos of that three day period, and the real heroes of the three days were the snowmobilers who just kept on working, 24 hours a day, to get people and goods where they needed to go.

You don’t hear a lot of snowmobiles on city streets anymore. I guess we’ve gotten too big. But in those days Mayor Les Cooke and 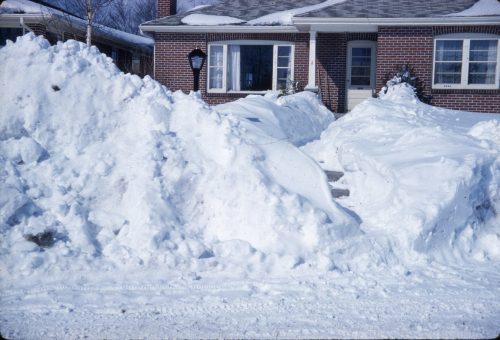 council (who met in the building which was the ‘arch’ on Mulcaster St) were considering banning snowmobiles from city streets. Something about safety hazard and noise and things like that.  I do remember that after the storm, the zeal to ban snowmobiles was abated and the valuable snowmobile community got a few more years of street use.

What was wonderful about that storm was that life carried on. Babies were born (but not Janis Hamilton’s, not that weekend). People got shovelled out because neighbours got out with shovels. You could hear laughter across driveways and streets as whole households just got outside and dug. The few people with snowblowers saved the day for neighbours. It was us (and the tulips) against the elements.

The elements won. The tulips had to wait until 1976.