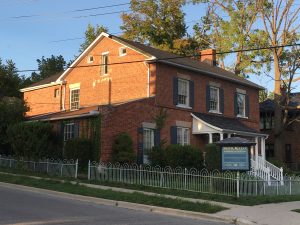 The ladies of early Barrie, along with all of their Canadian sisters, laboured under the most extreme circumstances each and every day. Corseted and coiffed in the restrictive fashions of the day, their clothing was equally unsuitable for the deep Barrie snow, the winds off the bay and the oppressive heat and humidity of summer. Yet they were expected to scrub clean and iron clothes for perhaps a dozen family members, keep a wood stove stoked to cook and bake all the food, tend the children, dust, polish and scour everything, and look genteel all the while.

Married women spent a good deal of their time pregnant, which was to be put in a life-threatening situation each time. They all had a sister or neighbour who had died while giving life, so the thought was always there. Many infants and children passed away from now-preventable conditions. I can only imagine the varying states of fear and heartbreak experienced by a mother of 100 years ago.

Her children were well-behaved, the house immaculate and her baking was known all over Barrie, yet she was a second-class citizen. Women in Ontario did not have full voting rights until 1919. It was illegal for a woman to be either a doctor or a lawyer until near the end of the nineteenth century, and they were also barred from running for office, selling their own property, requesting a divorce, or obtaining credit. They were expected to receive lower wages than men doing the same job and the only career open to women that resulted in a pension was teaching.

Yet they thrived! The women of Barrie persevered and left their mark on this city in many different ways.

All blue and no pink. Theodosia Ann Parkhouse, this lady with the poetic name, married Thomas Caldwell in the late 1800s and gave birth to a succession of sons, a lot of sons! Theo, as she was known, had 13 boys in all. George became a well-known pharmacist in Barrie and Lewis was father to Bill Caldwell of Moldex fame. Eventually, Theo and Thomas adopted a little girl named Amy.

First lady, of sorts. Janet ‘Jennie’ Lindsay King was born in Kitchener, Ontario and married bank manager Harry Lay in Toronto in 1906. His career found them in Barrie and that is where they remained. Mrs. Lay was the granddaughter of William McKenzie, the first mayor of Toronto. Her more well known relative was her brother, William Lyon McKenzie King, 10th Prime Minister of Canada, whose stoic exterior hid a secret life of séances, mediums and conversations with his long-dead mother. Mrs. Lay often filled in as hostess when her bachelor brother entertained royalty or heads of state.

An athlete like no other. She came to Barrie to as a baby. This unlikely Olympian, the daughter of a

Ukrainian junk dealer, attended Barrie Collegiate Institute and quickly excelled at any sport she tried. This was Fanny ‘Bobbie’ Rosenfeld, the stand-out star of women’s hockey, baseball, tennis, golf and numerous track-related sports. She gathered more points for her country than any other man or woman at the 1928 Olympics as the small Canadian women’s track team swept all their events. Although debilitating arthritis caused her to retire early, she found another career as a rare female sports writer for the ‘Globe & Mail’ and was named Canada’s Female Athlete of the Half-Century in 1950. 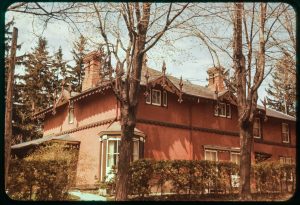 Bird in 1860 in her native China. Amoi Chun, later known as Amy Laura, married Shearman Bird and accompanied him to England. His poor health led them to move to Canada and settle in Barrie where Shearman used his architectural skills to design Sans Souci, the house at 17 Peel St., in 1872.  Known locally as ‘the Bird House’, Shearman mixed popular Gothic Revival stylings with pagoda-esque notes, along with a separate tea house in the garden, which were touches obviously intended to honour his surely homesick bride.  Shearman died not long after the house was built but Amy carried on for another 50 years in Barrie, raised their 8 children alone and found a design outlet of her own as she grew beautiful gardens at home and was responsible for the tree planting and terraced gardens at Trinity Anglican Church.

The Mayor wore a skirt. It had only happened once before in Ontario. In 1936, in the tiny northern community of Webbwood, the voters elected a female mayor and Barrie was the next town to do so when Marjorie Hamilton was elected in 1950. Mrs. Hamilton had been widowed for 3 years, and a grandmother for 6 weeks when she took over as Barrie’s mayor. Her time in that office lasted only 2 years but she went on to be appointed as a judge in family court despite having no law degree. She had spent many years in politics and had shown a special dedication to the social welfare of families.

From Jamaica to Barrie, then Ottawa.  Susan Agnes Bernard was the only surviving daughter of sugar plantation owners, Thomas and Theodora Bernard. When the economy faltered and her father died in a cholera epidemic, Susan and her mother sailed to England while her brothers immigrated to Canada and settled in Barrie. Hewitt Bernard established himself as a successful lawyer and sent for his mother and sister, Susan, in 1854. Three years later, Hewitt became private secretary to an up-and-coming politician named John Macdonald. It was through her brother that Susan, known usually as Agnes, was eventually introduced to the man that would become the first Prime Minister of Canada. Agnes became the second wife of Sir John A. Macdonald in 1867.

More political connections.  Emma Catherine Lally and Agnes Elizabeth Lally were both the daughters of Edmund Lally who was a banker and later a treasurer for the County of Simcoe. Both married into political circles.  Emma married handsome Irish-born lawyer D’Alton McCarthy in 1867. Agnes married Richard Bernard, the brother of Susan Agnes (Bernard) Macdonald. Richard Bernard died early, as did Emma (Lally) McCarthy in 1870. In 1873, D’Alton McCathy married his late wife’s widowed sister, Agnes, and became both Sir John A. Macdonald’s advisor and a quasi family member.

A very Canadian milestone! It must never be forgotten that the very first time that a hockey game was recorded and the score was kept for an all female match, was right here in Barrie in 1892.  The notable team was made up of Zella Stevenson, Olive McCarthy, Jessie Oliver, Bessie Stevenson, Del Spry, Bertha Holmes, and Georgie McConkey. Oh Canada!