A Stroll Through Barrie Courtesy of Rayner McCullough 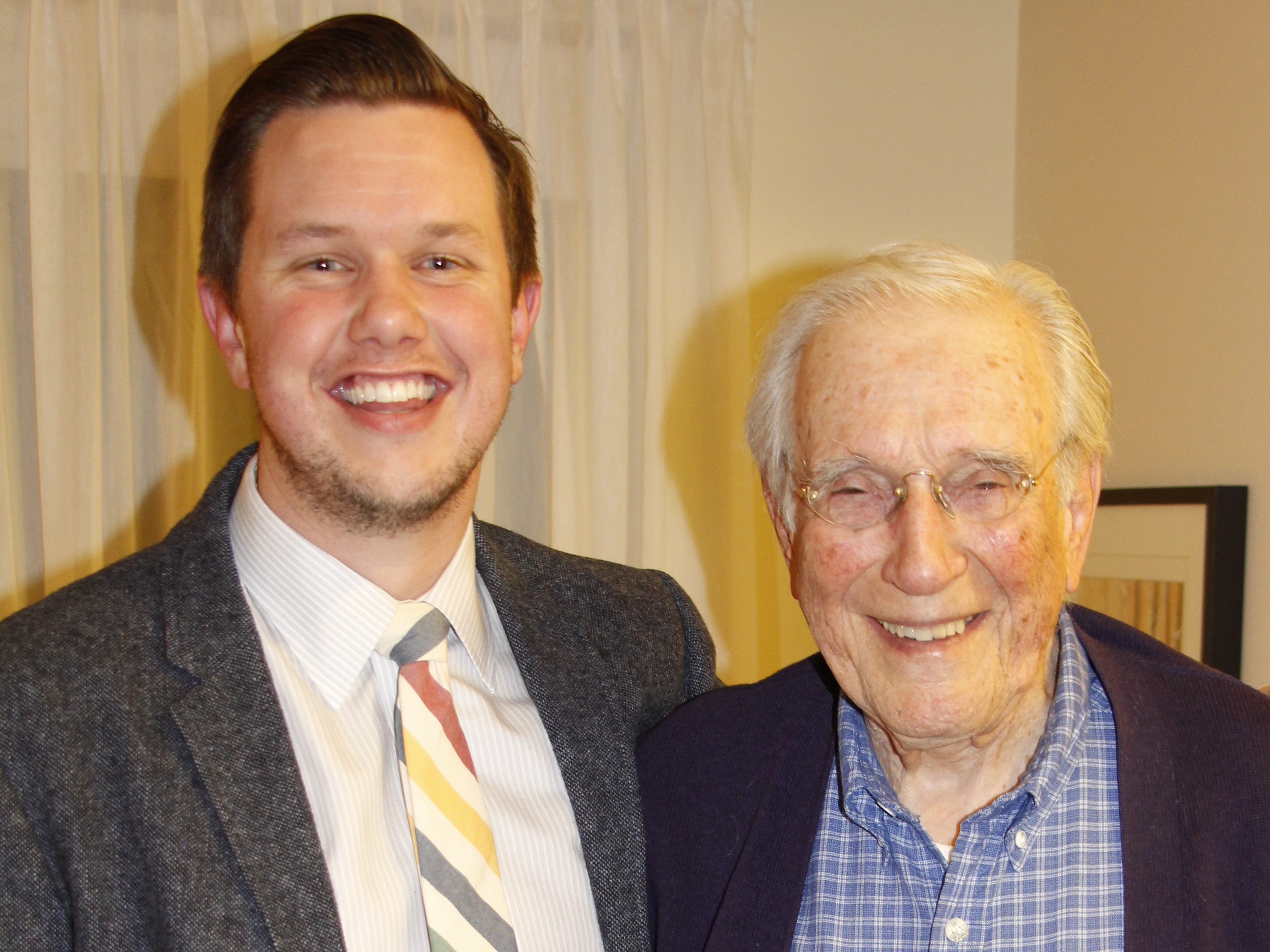 Steadily, Rayner McCullough walks me along Elizabeth Street. Hines grocery, then next to the that, a meat market. Next, an empty lot next to Central United Church on the east side of Toronto Street, where he played in the mission band.

Just seconds later, we make our way to old Allandale, en route to a hardball game at Shear Park on Holgate and William Streets. There, his eyes light up as he sees Webb’s menswear store.

“It was as good of a store as you’d find in Toronto,” he explains.

From there, we pass J.D. Wisdom and Co., one of the town’s finest butchers; Whitty’s Drug Store with its thirst-quenching soda fountain, and around the corner on Tiffin Street, McGhee’s Barber Shop.

“These were just wonderful, wonderful people,” says McCullough, from the comfort of his favourite chair at Barrie’s Waterford Retirement Residence. It’s a line he uses to describe seemingly about every person he’s met in Barrie: “What a great guy he is,” or “What a wonderful person.”

The businesses that once lined the streets of his hometown, and the families who once owned them, still bring a smile to the face of the 86-year-old retired underwriter. And though their names are mostly gone from those facades, his picture-perfect memory of Barrie makes it clear that they still have a positive impact on his life more than a half-century later.

McCullough’s stories are just as clear as the decades-old photos we cherish while clicking through pages at barriearchive.ca. As I chatted with him for more than two hours in his apartment, it became obvious that he didn’t acquire an outstanding memory by chance.

It was as strong as the relationships he built in his hometown. It was founded on thousands of moments he didn’t take for granted while living in Barrie.

The son of a grocer, McCullough entered the insurance business in a way that only seemed possible before the advent of social networking, digital resumes and widespread post-secondary education: By accident.

He met a salesman named Franklin Morton-Boys while working the cash register at his father’s grocery store, on the corner of Elizabeth and Mary Streets. Every Friday after a round of golf, Morton-Boys entered the store looking for two packs of Buckingham cigarettes and a quarter-pound of bacon. Instead, the young McCullough would send him on his way with a carton of cigarettes and a pound of bacon.

“You’re a pretty good salesman,” Morton-Boys told him. “Did you ever think about selling insurance?”

Only months later, McCullough’s father sold the grocery store and Rayner wrote his tests, acquired his certifications and wound up selling life insurance from the second floor of the Toronto-Dominion Bank at the corner of Dunlop and Owen Streets.

At the request of his boss, every morning McCullough would walk to work from his family home at 49 Mary Street — and every night he would take a different route back home.

“Every day I met new people,” McCullough explains. “They’d be out cleaning the windows, or sweeping the street.”

McCullough got to know people across the country, as business took him, his wife Pauline, son Stephen and daughter Nancy to Hamilton, Windsor and as far as Brandon, MB before returning to Barrie in 1972. He set an example for others his community, serving as president of the local Shrine Club and chairperson of the hospital at the Royal Victoria Regional Health Centre.

In 2014, he was honoured by the hospital with the David Blenkarn Spirit Award for his tireless volunteerism and generous support of children’s mental health and addictions research and treatment in Barrie.

Take a break to watch my interview with Rayner about his place in our community, and you’ll be left with the same impression I was.

What a great guy he is. What a wonderful person.

Also, don’t forget to click here to watch as Rayner speaks about downtown Barrie in the 1950s.