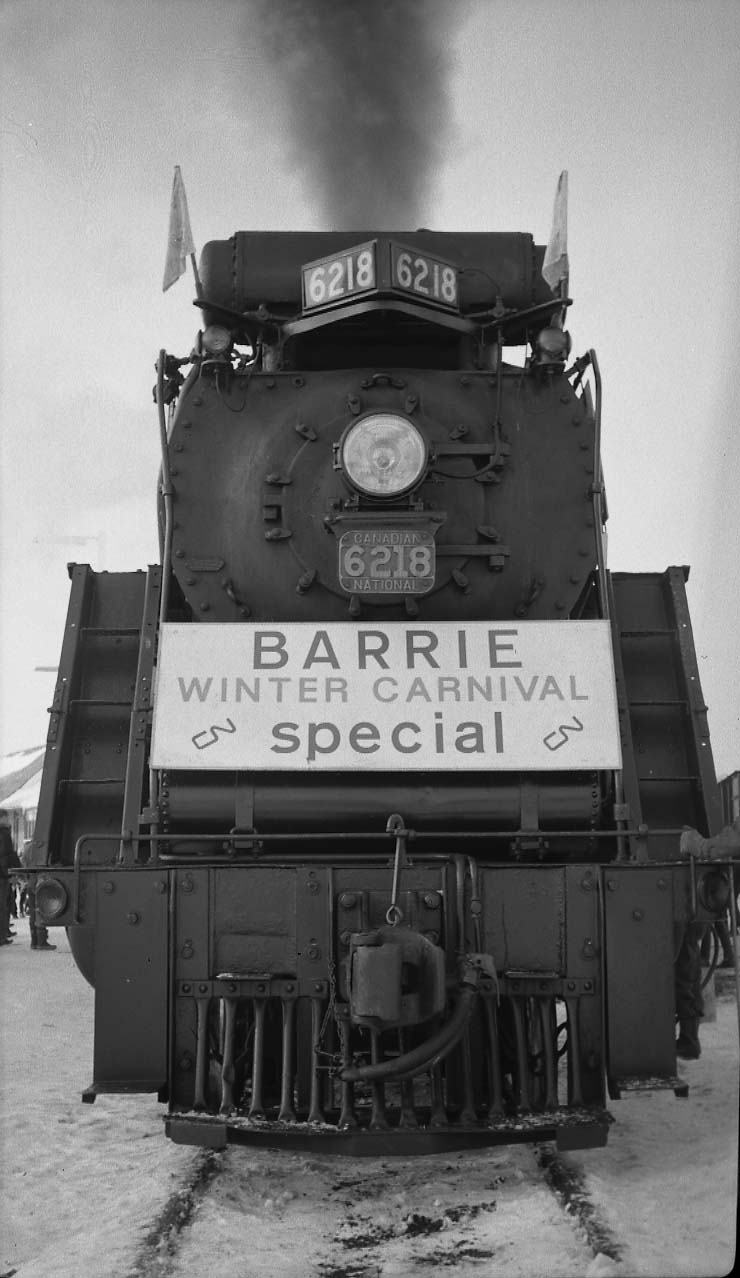 When Mother Nature builds you your very own arena, complete with ice, lots of good lighting, enough space for a limitless audience and a surface twenty-six hockey rinks long, you make the best use of it that you can! Every winter, the cold northerly winds blew and the mercury plummeted and soon after, the waters of Kempenfelt Bay turned rock solid and remained that way for several months. The ice fishermen, skaters and those enjoying a shorter walk to Allandale all took to the ice, and in 1957 the Town of Barrie decided to create an event that would attract all of its citizens to this seasonal playground. The Barrie Winter Carnival was born.

That first Winter Carnival, held on February 15th,16th and 17th in 1957, was largely a sporting event with competitions in speed and figure skating, broom ball and novelties like tug-o-war and barrel jumping, all of it held out on the ice of Kempenfelt Bay itself.

The Barrie Examiner reported on the opening ceremonies in its February 18th edition.  “A gay torchlight parade, 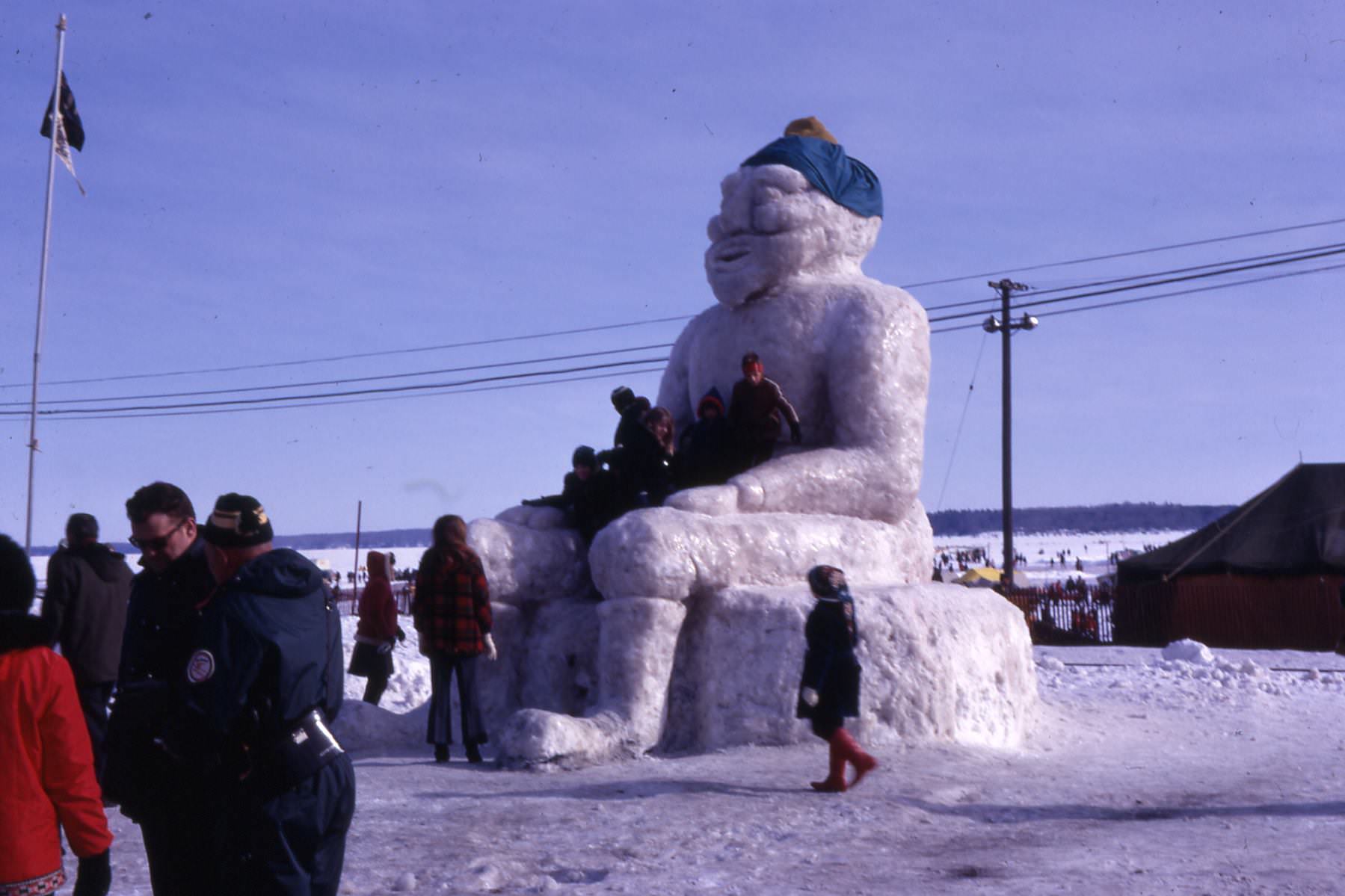 headed by Mayor Willard Kinzie driving a veteran car, brought the people in their hundreds to St. Vincent Park and on to the ice of Kempenfelt Bay on Friday night for the opening of Barrie’s first Winter Carnival and International Speed Skating Championship. It was a brilliant opening for what has been a most successful weekend of sport in the town.”

By the third year, the Carnival was attracting some 5,000 people onto the frozen bay to watch the fun. New events were being added all the 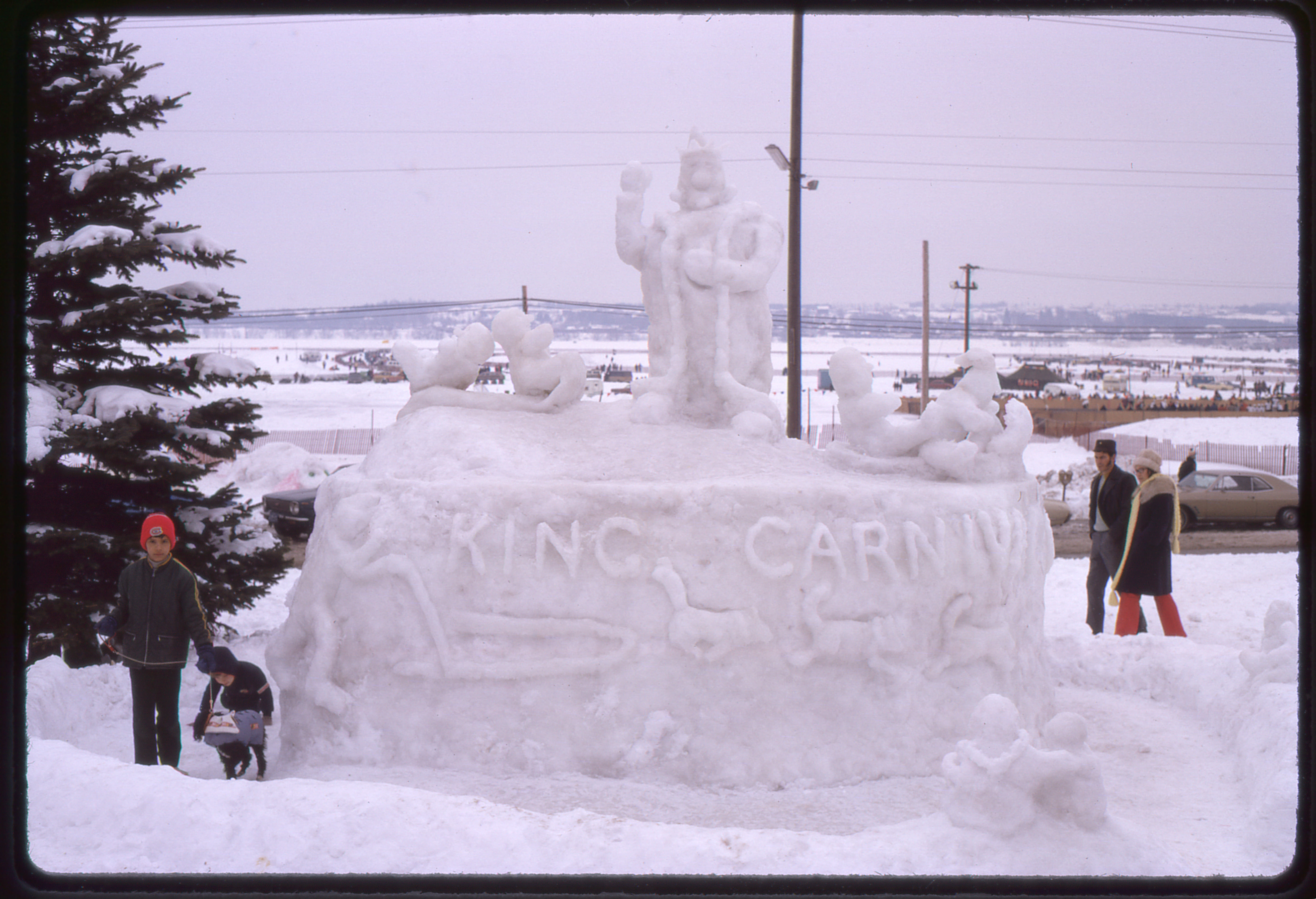 time, and one was so enthralling that it nearly caused a serious disaster! “Although speed skating was the major event with a large crowd always centred around the track, the aquateers proved to be an almost disastrous attraction.”, so reported the Examiner on February 16, 1959. “At one time, nearly 1,000 people were gathered around the two holes in the ice where they performed. Water welled up through the holes with the weight of the spectators.” Eventually, a diver was sent down to look at the underside of the ice and when he found evidence of serious cracking, the police were called to move the crowd as a safety measure.

In 1961, The Barrie Winter Carnival had added a fishing derby, dog sled races and very well received demonstrations put on by Airborne Division from Camp Borden, all of which increased the number of attendees to about 15,000 people. By 1970, visitors could watch the judging of the Carnival Queen contest or the competition for the best beard, see parachutists jump from a plane onto the ice, ride in a hot air balloon or attempt to get a seat in the Dunlop Arena for the always sold-out Carnival variety show. The number of carnival-goers that year was reported to be 55,000. 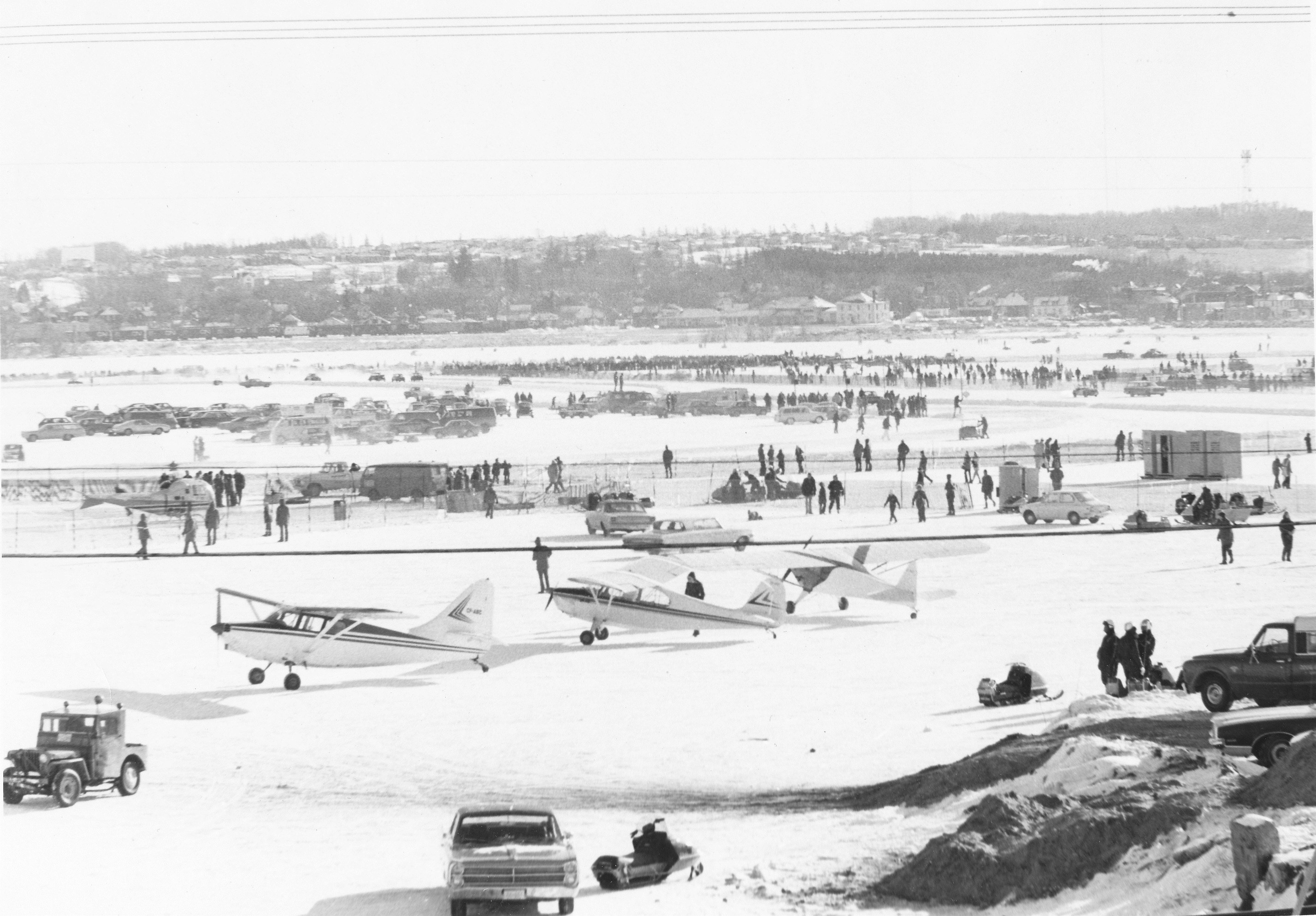 Over the years, the crowds have swelled but the climate has not always been favourable for the formation of good, thick ice. Eventually, the Barrie Winter Carnival became Barrie Winterfest, a different but equally fantastic celebration held on the shore surrounding Kempenfelt Bay, and not dependant on the freezing, or not freezing, of the water. At one time, the ice could easily be one foot thick by the second week of January, but that seldom happens lately.

Gone are the speed skating competitions and bed races down Dunlop Street, but there are a 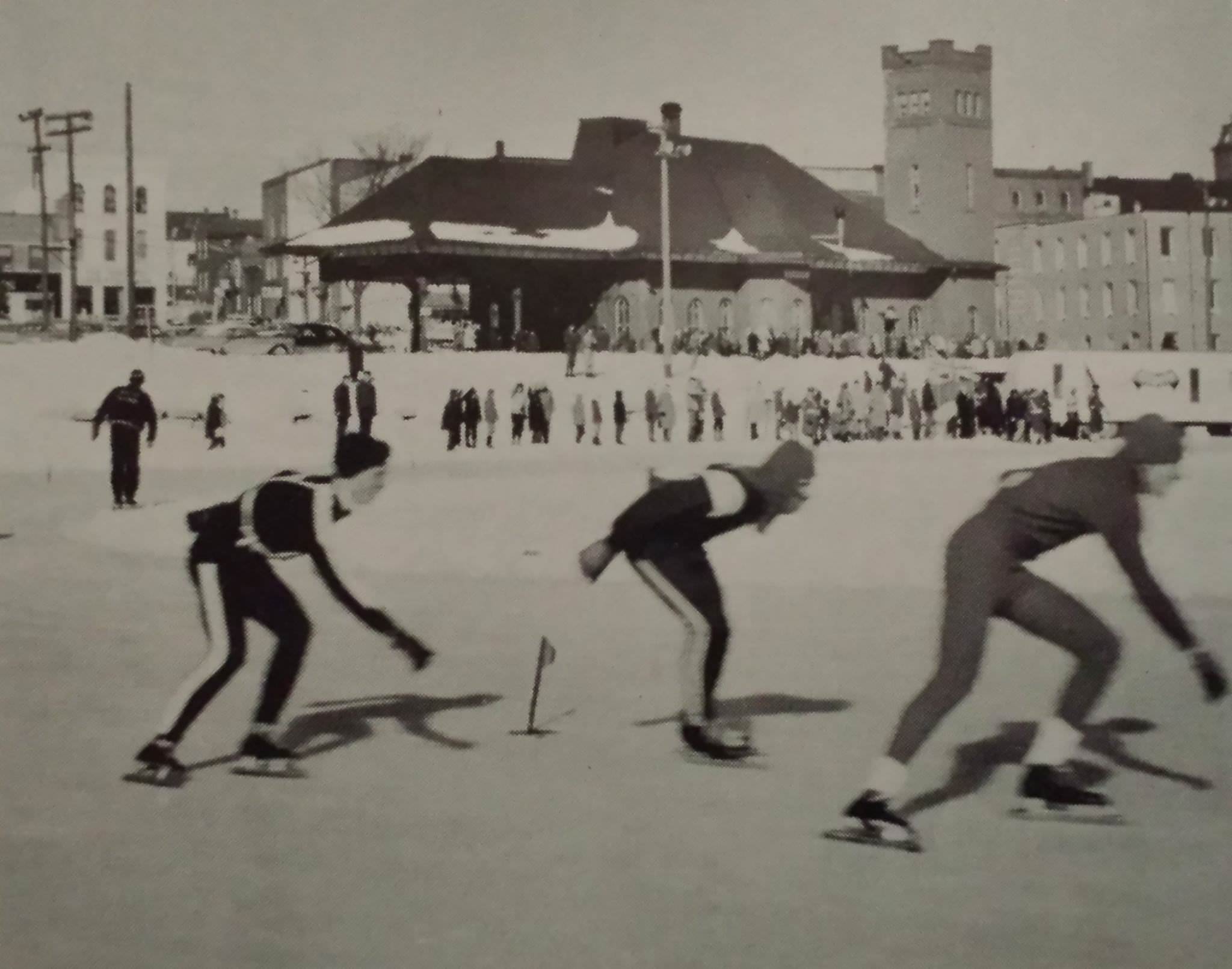 number of fun activities that have become a tradition for local families, including mine. The pancake breakfast at Central United Church is always a must do, but sadly this will likely be its last year at that location. Watching the antics at the polar bear dip held at Centennial Park is always a riot! On February 4th and 5th, Barrie will carry on the tradition of celebrating this cold, white season in style once again this year – its 60th!!  Bring the family down to Barrie’s frozen jewel, beautiful Kempenfelt Bay, and try some maple taffy, check out the ice and snow sculptures, find a kids’ craft centre, follow the Hot Cocoa Trail or warm up at the Soup’s On! event.

Join in the fun. This is Barrie and we do winter very, very well!

Snowmobiling in Downtown Barrie at a Winter Carnival.

Ice Carnival, Parade Barrie as City and fireworks (January 1, 1959), street lights at Christmas in 1958, Skiing in Collingwood and Snow Valley in February 1959.