What’s in a name?

A little park with a big history 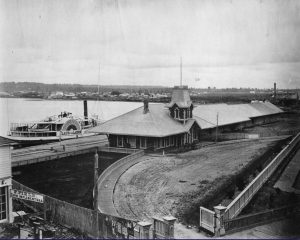 Over the course of Barrie’s history, what is currently known as Memorial Square appears to have had an identity crisis.

Originally Memorial Square was the terminus of the nine-mile portage between Kempenfelt Bay and Willow Creek which flowed into the Nottawasaga River.  This ancient trail was first used by the Wendat, whom the French then called Huron.  In map from 1688, it was labelled as “Portage de dix Lieuel”.  The trail played an important role in the War of 1812 and it continued to be used by fur traders, explorers and settlers until the 1830’s.  By the 1850’s a new form of transportation was evolving.

The Northern Railway under the leadership of Frederic Cumberland had reached Allandale in 1853.  Angered by 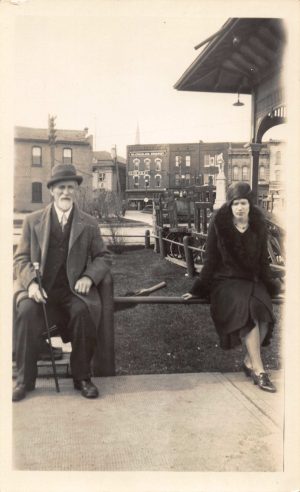 Barrie’s refusal to pay for direct service, Cumberland stated “He would make the grass grow in Barrie streets and would pave Allandale streets with gold.”  It wasn’t until 1865 that a switch line was extended to Barrie and a brick station along with freight sheds were built at the foot of Owen Street in an area to be named Station Gore.  From there, passengers could then board the Lady of the Lakes steamer to sail to Orillia and Muskoka.

In 1884, a “new” Barrie post office and customs building was erected facing Dunlop Street in Station Gore.  Designed by a local architectural firm, the new facility was deemed to be the most beautiful building in all of Barrie.  Naturally, the entire site was then renamed Post Office Square.

The town of Barrie in partnership with the townships of Vespra and Innisfil erected the Soldiers’ Memorial to honour those who had lost their lives in WWI.  The 23-foot high Cenotaph was unveiled before a large crowd in Post Office Square on June 28, 1922. 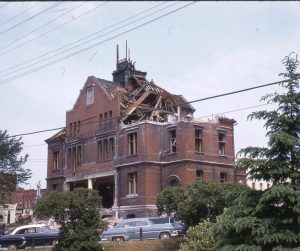 Fast forward to October 26, 1955 and a Barrie Examiner headline read “What Is To Become Of Our Old Post Office?”  In 1956, the town purchased the building for $15,000.  After almost two years of heated discussion as to what to do with this historic structure, the council paid $1,740 to have it demolished in 1958.  While that debate was going on in 1957, Post Office Square was renamed Fred Grant Square.  The town council chose to honour the then 89-year-old journalist and local historian Fred Grant for “saving the history of the town from oblivion.”

Another dramatic change occurred in 1963.  With the decline in CNR passenger traffic, the Barrie Station was torn down and years later the tracks were removed.  When the new bus terminal was built on Maple Avenue, many of its exterior design features mirrored the facade of that old Barrie Railway station.

With such a long, storied and significant part of Barrie’s history, the city designated the area as Memorial Square

Now Memorial Square which serves as the downtown gateway to Barrie’s remarkable waterfront park system will become ten times larger in size.  “Great cities in the world usually have a great public space at their core,” stated Mayor Jeff Lehman.

Even Barrie’s nemesis, Frederic Cumberland would be impressed!