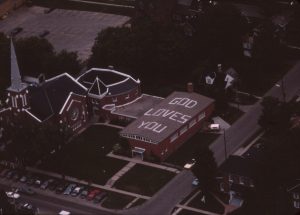 I parked several blocks away, in the lot beside the Barrie Public Library, where one of the H-Block houses likely stood, and pulled my coat tightly around me as I walked eastward in the direction of Collier Street United Church.  Sure, I could have parked closer, but on this blustery November day, I wanted to walk to church as the Barrie residents of yesterday must have done. I could imagine the fine ladies in their Sunday best, attempting to keep carefully coiffed hairdos and picture hats in place as they marched towards Collier Street, snow like today swirling around their skirts. The children, in their proper little suits, likely complained that it was too far, and they were cold, while their fathers grumbled that their Sunday would be better spent with their pipe beside the fire.

I passed in front of the row of stucco homes at Owen and Worsley. The thick plastered walls hide log construction beneath, but the façade is looking cracked and I wondered to myself how much longer will they last? As I came to Worsley and Mulcaster Streets, I looked up the hill and down. The old jail sits perched on the summit, as it has since the 1840s, and looks down at its much younger neighbour, the 1970s-era courthouse. Younger still is the yet to be completed multi-purpose tower at the corner of Mulcaster and Collier Streets.

Where has Collier Street United Church gone? Church steeples were once the highest man made objects in any town, and none were higher than the spire at Collier Church, but today it is no where in sight, almost as if it were swallowed up by modernity. But rounding the corner, I saw it, at least the wrought iron railing of the front steps, and that many well-shined shoes were entering the old front door.

How have I never been in this place before? I know that my children visited the church hall every year for Winter Fest fun when they were younger, and that the same folks who eat the soup kitchen meals that I make often lay their heads down here when the Out of the Cold program is running, but I have never been inside the beautiful sanctuary until today.

It is an old style of church, the kind I like, with lofty ceilings, stained glass windows depicting the traditional images 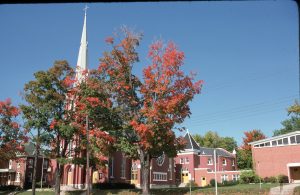 of Mary and Jesus, ornate columns, wooden floors and pews, and a semi-circular balcony. Collier Street United was built on this spot in 1864, and so had already been serving the faithful of Barrie for 100 years when I was born.  Canada was just beginning to negotiate Confederation in Charlottetown that year, the American Civil War raged on and Abraham Lincoln was president, while Queen Victoria was living in isolated widowhood.

Her beginnings were long before that, 180 years ago in 1836, as a Methodist church somewhere on Dunlop Street. Methodism had taken off in Britain and quickly spread to Canada where the Barrie congregation outgrew 2 earlier sites before arriving at their present location. By 1925, the Methodists had largely amalgamated with Presbyterian and other churches to form what we now know as the United Church of Canada.  Look up as you enter the front door. The plaque above still reads Wesley Methodist Church Erected A.D. 1864

Still a delightful piece of architecture, Collier Street United Church is also very much alive today with a vibrant congregation involved in many programs from the usual choirs, bake sales and Bible study groups to a refugee sponsorship committee, regular concert series and movie nights. The gracefully carved pews were packed on the day I was there as November 20th was set aside as 180th Anniversary Sunday. I imagine that many parishioners from the past came to attend this special service and hear the sermon given by Rev. Bill Fritz who served this church from 1972 to 1996.

After the service ended, I was one of the first to enter the parish hall for coffee, cake and those perfectly crafted little sandwiches that I love so much. Anyone who knows me well, is aware that I have a problem with these tiny delights, particularly at funerals, when my mind begins to wander and becomes fixated on them, causing me some guilty feelings. The CSUC ladies did not let me down! 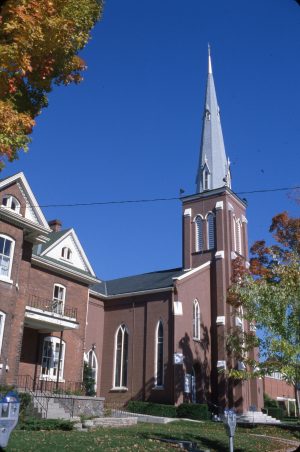 I was happy when two older couples came to sit with me in the fast filling church hall. My hope was to strike up a
conversation with some long-time parishioners and learn a bit more about the church, but they all professed to be fairly new at Collier – only 14 years, they informed me. But we had a great chat about all sorts of things like home births, mission trips to Hong Kong and adoption. Ruth is 82 years old and has a twin sister, Anne, who attends my sister’s church, Burton Avenue United.

So, I left Collier Street United well fed, uplifted, informed, befriended and feeling just a little bit closer to the rich history of Barrie than I had before. On this snowy November day in 2016, I rested myself on a pew where likely someone born in the 1700s had also once been seated. The past, the present and the future all swirl around this old building, both within its walls and just outside at the crossroads of Collier and Mulcaster Streets. Collier Street United sits ever serenely, just watching it all flash by. She has seen it all, and more, before.

Note: Collier Street Church will be receiving a Heritage Award from Heritage Barrie, to be presented at the City Council meeting on December 5th.