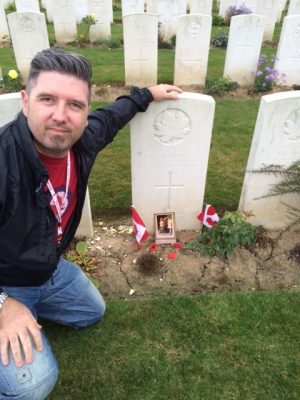 The pilgrimage that brought me to the grave site of my great uncle, Private AJ Blake, began long before I found myself at a Commonwealth Cemetery on the Somme, just outside Courcelette, France this past September with my 16-year-old son, Zachary.

It began many years ago when I inherited his medals from my mother’s side of the family, obtaining them in the same broken-down box that my great grandmother would have received them in after the Great War. They were never displayed in our family’s homes; in fact, one of the medals had been lost. Immediately I thought, how does it honour the sacrifice of my own family if we just keep these medals, and his memory, in a box.

Over the next couple of years, I went to work replacing his lost medal from England, obtaining his Great War records, and the war diaries of his unit. Private AJ Blake was in the Machine Gun Corps of the 7th Battalion, 3rd Canadian Division, serving Canada from 1915 until his death in the Battle of Courcelette on the Somme, September 27, 1916. I had his medals and the Silver Cross given to his mother mounted and now it rests in a prominent place in our home. I started to consume almost anything I could read and watch about the First World War, specifically about the Somme, in hopes of trying to find out more about who Blake was, what the conditions were like when he served and how he died. 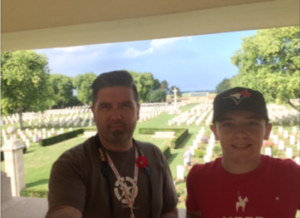 While some things became clearer in my self-education on the war, many questions, including where and how AJ Blake died remained a question.

But sometime in 2014, I thought: “Wouldn’t it be amazing if I could somehow in 2016, on the 100th anniversary of my great uncle’s death, travel to France, find his grave and pay my respects?”

To my knowledge, in 100 years, no one in our family had ever visited there. Whenever I thought of this, I felt incredibly sad and almost guilty. Those who know me knows I am ferociously proud of the men and women of the Canadian Armed Forces and our nation’s military history. How could I have this patriotic pride, but ignore the grave of one of my own family who served?  It didn’t seem right. 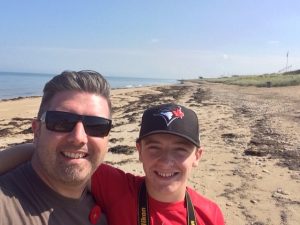 With more research and lots of saving in a tin above my fridge, my bucket list pilgrimage of remembrance became a reality two months ago. As it turned out, my tour arrived on the Somme, in Courcelette – the first site of tanks used in battle – exactly 100 years to the day after the battle that would claim my Great Uncle’s life began, September 15, 1916.

My tour guide, John Hetherington, made our experience that day as personal as possible.

He took Zach and I past the Sugar Factory where AJ Blake might have dug in for cover. He took us to the battlefield area itself and masterfully laid out the battleground terrain. We toured a place called the Chalk Pit where Blake would have slept a night or two before his death; and because his cemetery was a first aid station in 1916, I know I was within only a kilometre or two away from where he would have been struck down. Kicking around in the farmer’s battlefields for just five minutes, I found a piece of shrapnel that had worked its’ way to the surface even today. It was a surreal, exhilarating and deeply meaningful day. 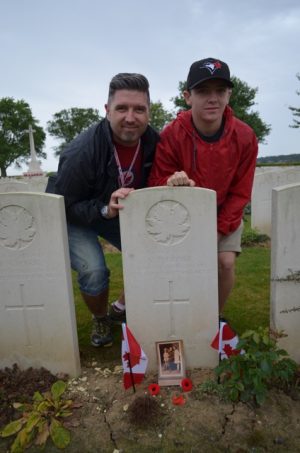 But our biggest surprise was reserved for the grave site. I wasn’t sure how I was going to respond finally getting there. There was silence. Emotion. I almost didn’t want to go in, but even so, was exhilarated to be there.

AJ Blake’s official attestation papers declared he was 20 when he died. But when we arrived at his stone, my eyes were immediately drawn to the spot on the marker that read, “Age 17”.

He, like so many other boys, lied about his age to get in for this adventure to the old world. I realized that my 16-year-old son standing beside me was the same age as AJ Blake when he enlisted. That stark fact brought the whole thing very close to home in a hurry. How easily would I let my son today go off to war? The overwhelming emotions of that moment will stay with me forever.

Our 11-day battlefield tour took us to many places through France and Belgium to recognize the sacrifice of so many for our freedom: Vimy, Passchendale, Ypres and Flanders, Dieppe, Normandy and the Atlantic Wall.

I wish every Canadian could see these places and feel the depth of our national loss, but also the gratitude and high regard with which Canada is still held. I’m happy to have been able to pass AJ Blake’s sto 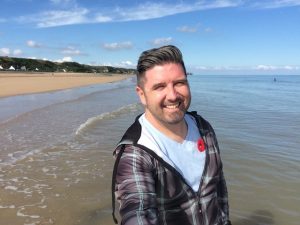 ry and the story of all these great Canadians on to my son, the next generation, in an experiential way that will stay with him forever.

I had never been prouder to be Canadian, after the first meeting with a member of my family I never knew, but found in the fields of France, who gave all for his country.