A Walk Through Barrie Union Cemetery

The Sun did not shine, it was too wet to play, so we sat in the house all that cold, cold wet day. Sorry, Dr. Seuss, I was not about to let some dreary fall weather stop me from going outside to join in on a historical walk through Barrie Union Cemetery.  As my Scottish cousins once pointed out, if they stayed in whenever it rained, they would never be outside at all! So I dug out my umbrella and headed out to meet Town Crier, Steve Travers, at the cemetery. 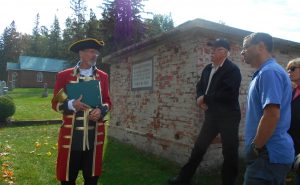 Sometimes, there are over 100 people on these walks, Steve told the gathered group, but today there might have been 20 of us who chanced the weather. As it turned out, our umbrellas were unnecessary. The sun came out as soon as we began and kept shining for the duration of our tour.

The first grave we visited was that of David Soules. David Soules came from a family of very early local pioneers, who were in fact only the second family to settle in the Big Bay Point area. David was a long standing neighbour and one-time political opponent of well known and charismatic George F. Warnica. Mr. Warnica had been born in New York state in the U.S. and arrived in Upper Canada in 1815 when there was little to be seen here but forest.  Somehow, these two hard working men of distinction had a serious disagreement one day and one challenged the other to a duel. As custom decreed, the combatants each chose seconds who were essentially a small support staff of close friends. Lucky for Soules and Warnica, their seconds desired no bloodshed and conspired to stuff the firearms with nothing more than wadding.  Both men turned and fired but their weapons failed to discharge.  Honour was restored, no lives were lost and both men lived on to be rather old men.

George Warnica must have been some kind of fire cracker in his time! A Warnica 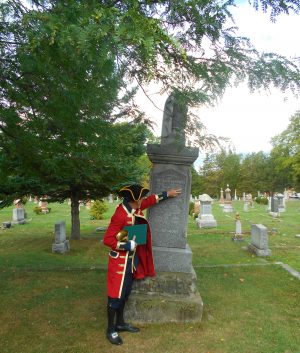 descendant had come along on our walk and told Steve that there was virtually no end to the exploits of his 3x great grandfather. We heard a fascinating tale about a judge who likely considered his sentences more carefully after meeting up with the cantankerous George. A scuffle with another man led to an assault charge for George. When he landed in court he was rather unhappy to eventually be found guilty and fined 40 shillings, a good bit of 2 weeks’ wages in the mid 1800s. He enquired of the judge if this fine would be the same no matter who he was found guilty of assaulting, in the future, in the Town of Barrie. The magistrate agreed that 40 shillings was the fine he had imposed and that George should expect to be fined that much again if he should assault another Barrie citizen. George laid out his 40 shillings and then 40 more. Then he punched the judge!

I suppose it is all about perspective, but if you stand to the north of Thomas D. McConkey’s tall monument, you will notice that it leans distinctly to the left much as the old Liberal buried beneath it would have done most of his life. Steve says that Bill Armstrong, caretaker of Barrie Union, often talks about the need to straighten it but Steve begs him not to as the slant is just too fitting and remarkable to alter! Mr. McConkey was a local businessman, member of parliament, second reeve of Barrie, warden of Simcoe County and the namesake of the building at 86/88 Dunlop Street East where I rented my first apartment. The McConkey Building was built in 1866 and had one of the few fire walls at the time, which eventually prevented one of the fires of the 1870s from spreading any farther east along Dunlop Street.

What connection does a name on a stone in Barrie Union Cemetery have with a manhunt in the Canadian Arctic? I was surprised to learn that the man who finally stopped the Mad Trapper, Albert Johnson (or whoever he really was), rested here under the towering maples. The chase began in 1931, when aboriginal trappers near Aklavik in the Northwest Territories complained to the authorities that someone had been tampering with their traps. Albert Johnson was an immediate suspect and two Mounties were sent to speak to him at his remote cabin. He refused to answer the door and the officers left to secure a search warrant.  When they returned with the warrant, Johnson shot at them through the door, wounding one of the officers. The next visit to the Johnson cabin was made by 9 men, 42 dogs and 20 pounds of dynamite.  After destroying the cabin, the Mounties found themselves being fired upon once again, and this time an officer lost his life. So began the famous manhunt that lasted 2 months, over 240 kilometres, through two territories and ended on the frozen Eagle River where Frank ‘Hap’ Hersey, who was wounded himself, fatally shot the Mad Trapper.  Frank later settled in Barrie and passed away near there in 2006, at the age of 100 years.

These are just a few of the more colourful citizens of Barrie who slumber at Barrie Union Cemetery. Mrs. Lay is there. I wonder if she ever knew that her dear brother, William Lyon McKenzie King, often consulted their long dead mother for advice while he was prime minister of Canada. You will also find a Chinese princess. Lumber baron Shearman Bird married Amoi Chun and they lived in the magnificent home found at 17 Peel Street. Here also lies James Gowan, who at age 27, became the youngest judge ever to preside over a bench in all of the British Empire.

I would not have objected to a rainy walk through the cemetery. It would have been rather atmospheric, I imagine, with mist among the stones and a sea of black umbrellas à la an old movie scene. Not that I would have noticed the weather much anyway as Steve presents such a fascinating commentary. I found myself leaning in close at each stop to capture every riveting detail of the lives of some of the most intriguing Barrie folks.

And she said to us two ‘Did you have any fun? Tell me, what did you do?’

This historic walking tour was sponsored by Heritage Barrie as part of Culture Days.