I believe in miracles.  I have to. 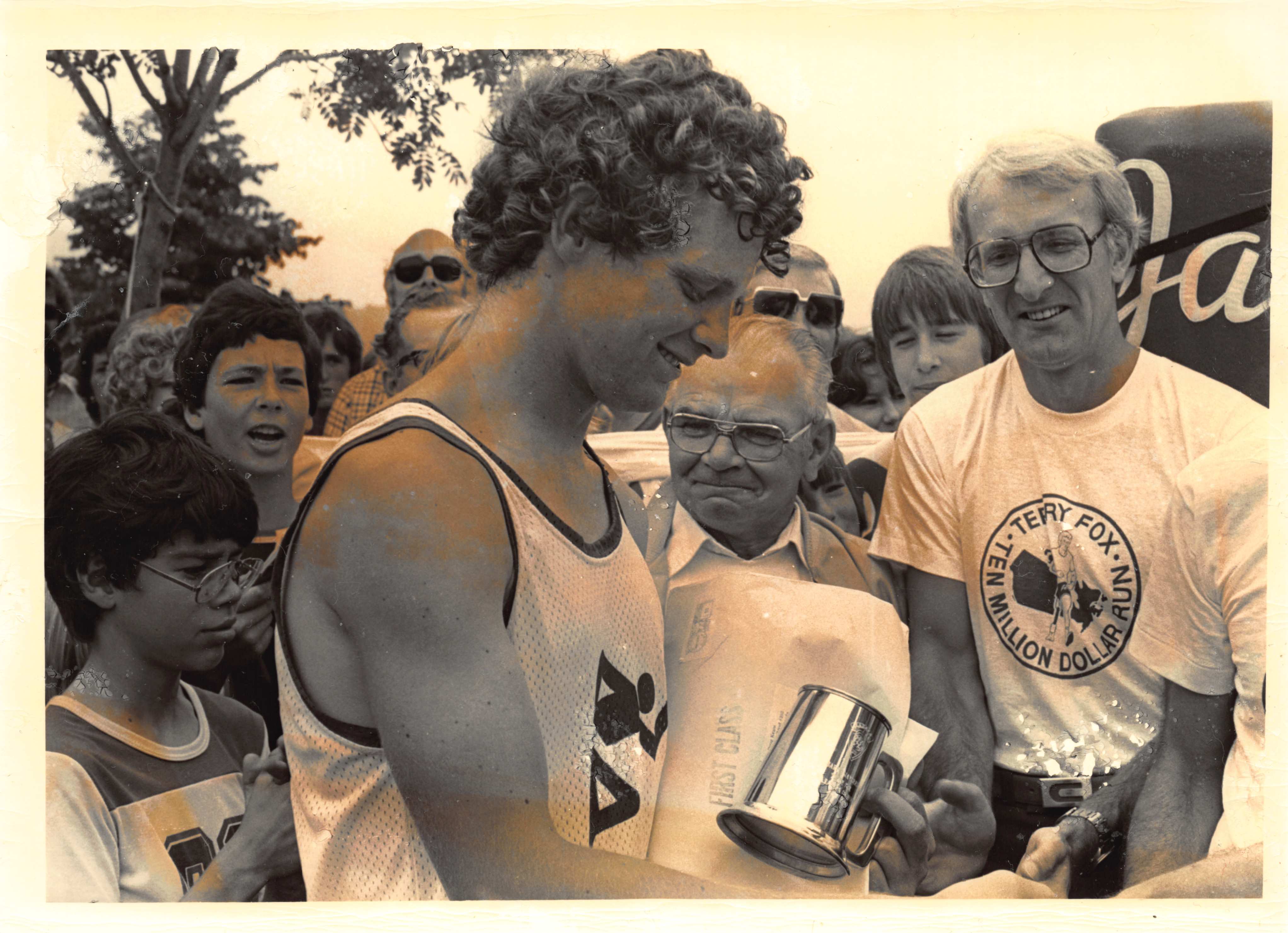 Have you ever run a marathon?  Don’t despair.  Less than 0.5% of Canadians have completed this challenge.  Finishing a marathon would mean covering a distance of 26 miles, 385 yards (42.195 km).  That would be like running from downtown Barrie to the otherside of Alliston. Now imagine doing that EVERY day.

Terry Fox was born in Winnipeg, Manitoba on July 28, 1958.  A few years later, his family moved to Port Coquitlam, BC.  There as an elementary student, basketball became his favourite sport.  Only 5 feet tall in Grade 8 and with very limited athletic skills,  he praticed dilligently every school day and all summer.

Terry was the last pick for the basketball team and got to play one minute that entire season.  His determination
made up for his lack of skill and by Grade 10 he was a starting guard on his High School Team.  In Grade 12, Terry was the co-winner of his school’s Athelete of the Year Award.

Attending Simon Fraser University in 1976, his determination was again recognized when he made the junior varsity 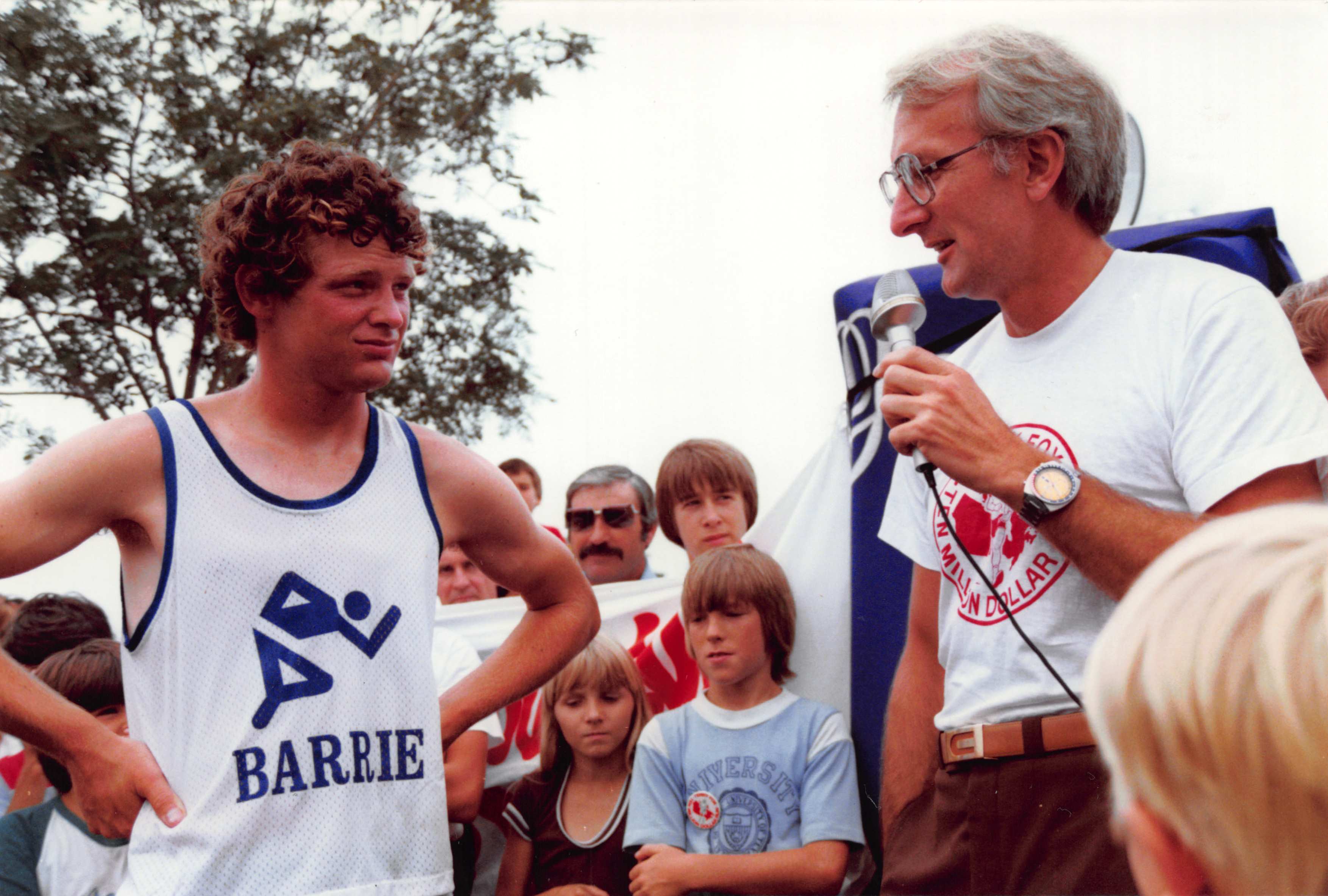 basketball team.  The following spring Terry experienced severe pain in his right knee.  He was diagnosed with osteosarcoma, a form of bone cancer.   Doctors felt that his best chance of survival – 50% at that time – would mean amputation of his right leg above the knee and followed by months of chemotherapy.

The night before his surgery, Terry read an article written by Dick Traum, an amputee who had run the the New York City Marathon.  “Someday I’m going to do something like that,” Fox told his attending nurse.

During his months of chemotherapy he saw how other cancer patients including many young children suffered and was driven to do something to help them.  His goal now was to run across Canada raising money for cancer research.  It would be called the Marathon of Hope.

In February of 1979 Fox began to train.  During the next 18 months, he ran over 5,000 kilometres preparing for his marathon.  That October, Terry wrote the Canadian Cancer Society seeking their support.  In his request he stated “I’m not a dreamer, and I’m not saying that this will initiate any kind of definitive answer or cure for cancer, but I believe in miracles.  I have to.”

On April 12, 1980, near St. John’s, Newfoundland, Terry dipped his artifical leg into the Atlantic and began his quest.  He would run an average of 26 miles a day through six provinces.  Facing snow, freezing rain, drivers trying to force him off the road and not getting the publicity that he had hoped for, he continued on.

When he reached Montreal, Canadians finally began to respond to the amazing odessey that was taking place.  As the enthusiasm grew, so did the donations in every town and city that he ran through.

Sunday, July 27, 1980 was a rainy day.  A little rain wasn’t going to stop Terry.  Awakened at 4:15 am he would begin that day’s marathon at a spot on Highway 11 between Bradford and Fennell’s Corners. 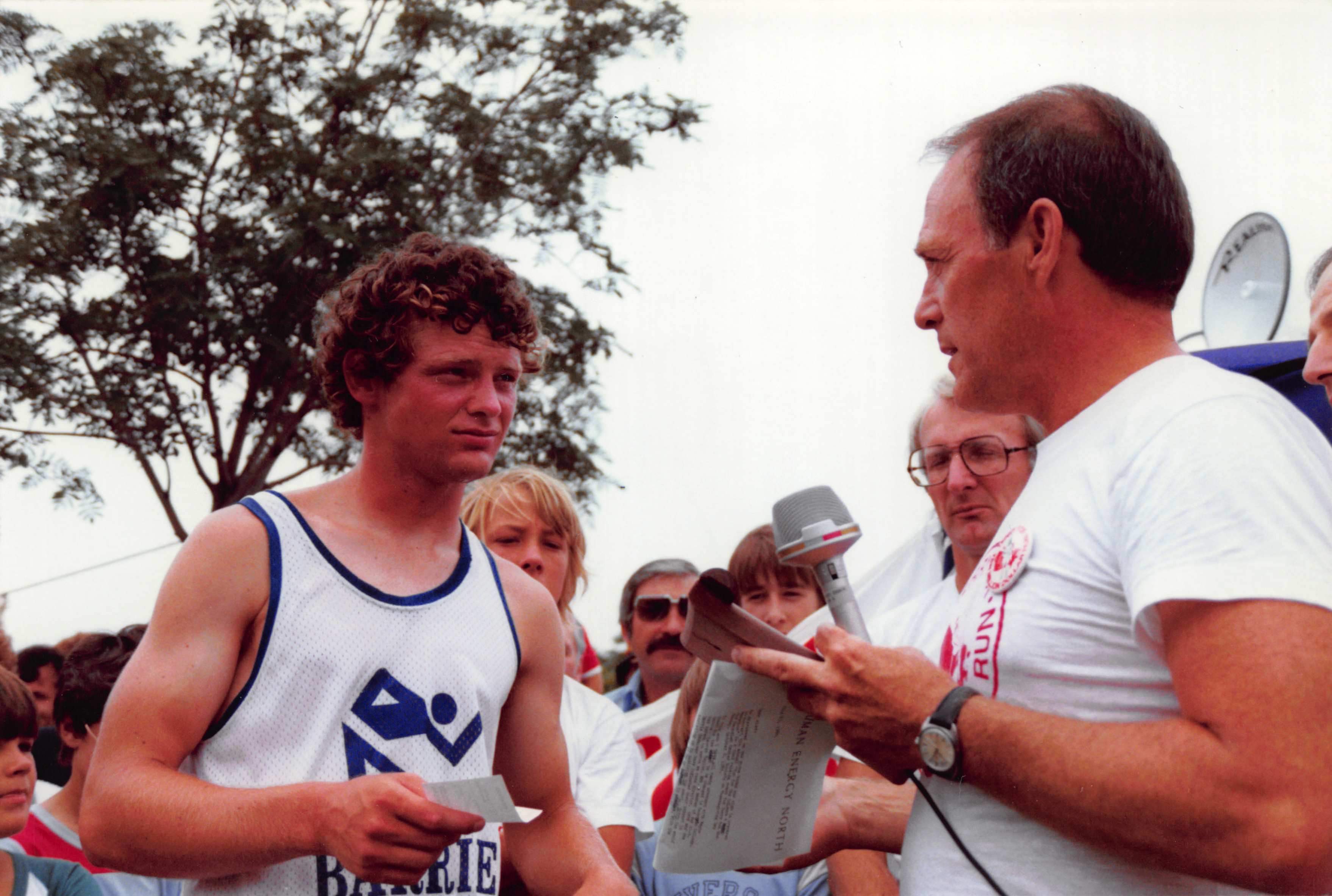 By the time he got to Barrie, more than 1,000 people had lined Lakeshore Drive to cheer him on.  In Centennial Park, a brief but warm reception had been organized by a local running club Human Energy North.  Greeted by Barrie MPP George Taylor,  Terry Connellan, the club’s president and dignitaries from Barrie and Vespra, Fox put on a singlet from the club in exchange for a Terry Fox T-shirt.  Fox was also given nearly $18,000 in donations by local citizens.  By 8:30 am and sticking to a rigid shedule, Terry was having his breakfast at the Bayshore Inn.

“Times are hard and I’m often sore, worn out and tired, but I’m not going to give up,” responded Terry in an interview with the Barrie Examiner.  His 26 mile run that day would end in Guthrie.  The next day at 4:00 am he would continue his run through Orillia.  Arriving in Orillia Terry would briefly stop for some cake.  It was Terry’s 22nd birthday.

On September 1, just outside of Thunder Bay, Terry was  forced to end his marthon after 143 days and 5,373 kilometres.  “Even if I don’t finish, we need others to continue.  It’s got to keep going without me, ” urged Terry.

Within seven days, spearheaded by George Taylor and members of the running club, a group of Barrie’s citizens heeded Terry’s call.  They responded by putting together a plan for a half marathon to be run.  On October 13, 1980, the Terry Fox Half Marathon of Hope was held in Barrie.  Over 800 runners from across Ontario participated in the event and $10,000 was donated to the Canadian Cancer Society.   Barrie was the first community in Canada to host 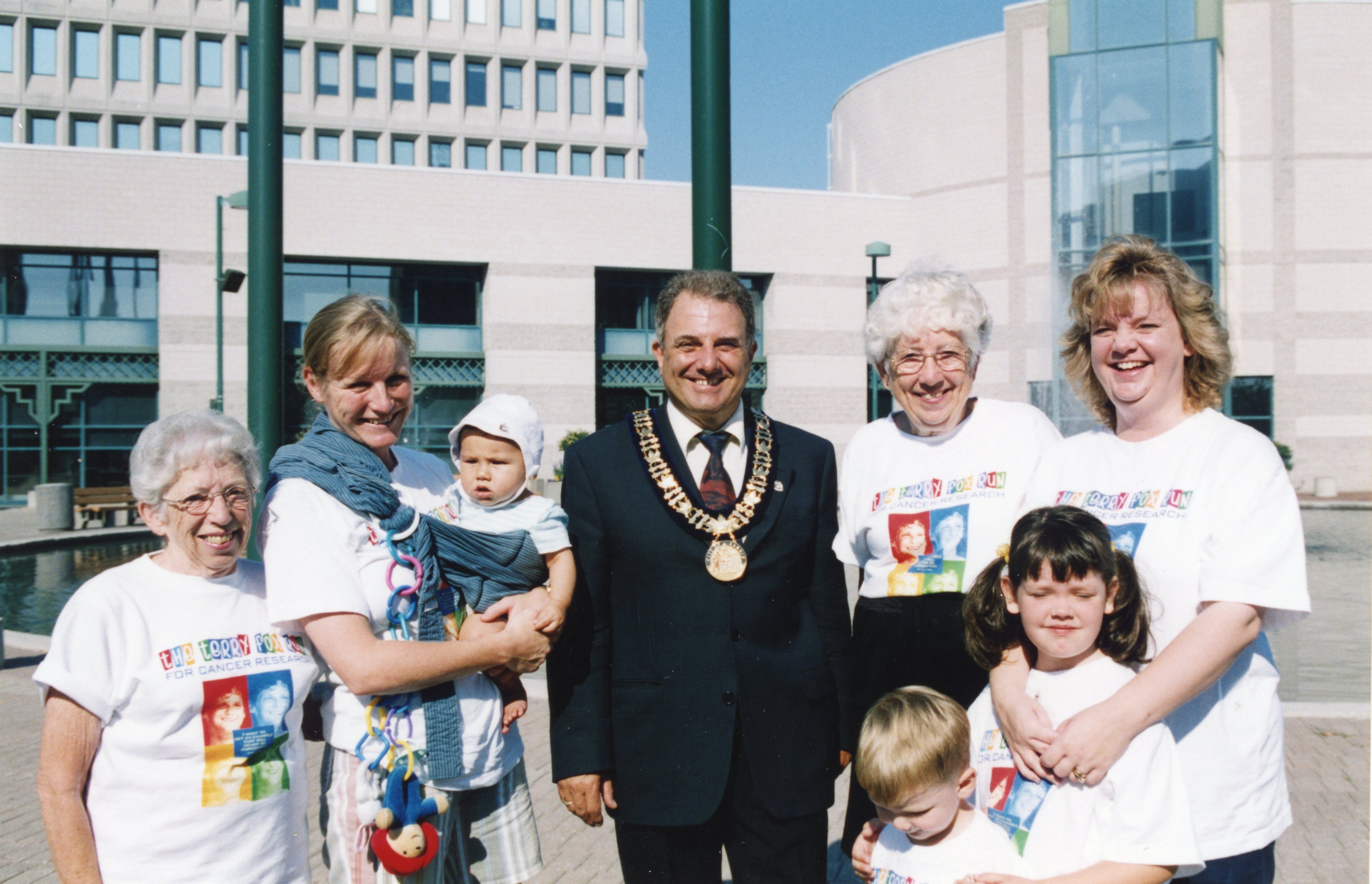 Almost a year later, The Terry Fox Run was held across Canada on September 19, 1981 with 300,000 participants
raising $3.5 M.  Since Terry’s death on June 28, 1981, the Terry Fox Foundation has raised over $700M for cancer research.  This money has been used to fund innovative and promising research and treatment of cancer.

If Terry Fox were diagnosed with osteosarcoma now, he would not have had his leg amputated and he would very likely be cured.

“I just wish people would realize that anything’s possible if you try.”    –  Terry Fox