A Bite At Midway Diner 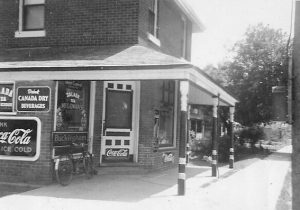 (a bite out of a blog by Mary Harris)

What do you say that hasn’t already been said about a restaurant that’s been talked or written about, and who’s walls are peppered with framed newspaper articles from the past? Not just local papers have proclaimed its virtues, the Toronto Sun has seen fit to write some kind words too, it seems. The Midway Diner on Bradford St. must be doing something very, very well to have such praise heaped upon it.

Apparently, Midway has been dishing up meals in this location for over 50 years now. I’m thinking this must be the current Barrie record for restaurant longevity. The building itself housed a shop, McGowan’s General Store back into the 1930s, as shown in this fabulous old photograph courtesy of Sean McGowan, a member of the Facebook group ‘If You Grew Up In Barrie … You Remember …’

Now, as my teen son put it, the exterior looks a little ‘sketchy’, but that’s only paint and it appears that some money has been spent on the interior, so don’t be put off by the outside. The dining room is open and uncluttered, decorated in black and white tiles, painted in sky blue and bright yellow. Choose a booth, a table or slide onto a stool by the counter. Check out all the old head shots of long ago Hollywood stars on the walls.

Midway doesn’t need much improvement. I can certainly see why the regulars keep coming and I know for a fact that some are at least third generation diners, possibly more. The secrets to running a long term successful business are few, I would say – do something very well and just keep doing it.