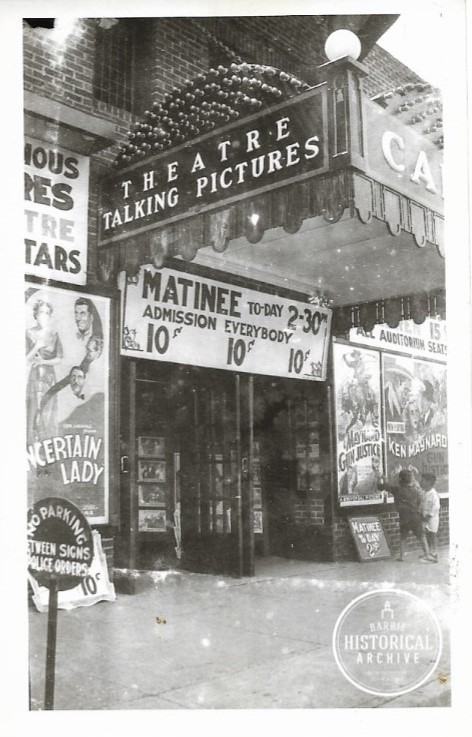 loads of rare images of the Roxy and Capitol theaters, old Barrie and much more.

A listener in London was encouraged to reach out to the Barrie Historical Archive after hearing this recent interview on CBC’s Ontario Morning. The gentleman’s father had been a projectionist at the Roxy theater and had preserved many never-seen-before images and some wonderful artifacts from the golden age of film.

These former Barrie residents shared many, many images, programs, clippings, yearbooks as well as some interesting old tools from the Barrie Creamery. The physical artifacts will be donated to the Simcoe County Museum or Archives once they have been photographed and documented for the Barrie Historical Archive, an online museum.

But it doesn’t end there. These enthusiastic Barrie historians-at-a-distance have remained in touch and are continuing to uncover and submit even more images and materials, and reaching out to their friends from old Barrie to do the same. That’s the incredible appeal and commitment to preserving Barrie’s fascinating past that the Barrie Historical Archive is experiencing from it’s community of supporters.

If you missed this interview on May 31st, you can listen to it here

If you have images or video of old Barrie, please contact us at info @ barriearchive.ca . You can also make a donation to this important community project at https://www.gofundme.com/BarrieArchive